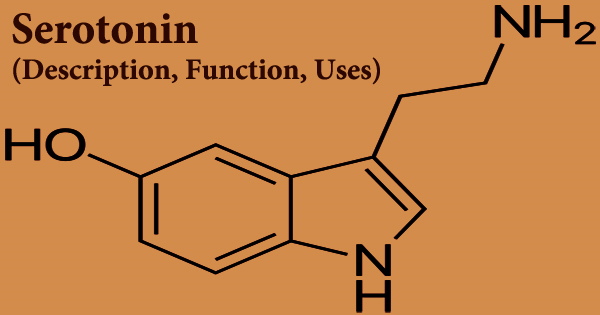 5-hydroxytryptamine (5-HT), often known as serotonin (/ˌsɛrəˈtoʊnɪn, ˌsɪərə-/), is the baby boomer of neurotransmitters: It was discovered in the late 1940s, had a rough and tumultuous childhood, became involved in the drug culture in the 1960s, and nearly died of an overdose in the early 1970s. It has a complex and diverse biological role, regulating mood, cognition, reward, learning, memory, and a variety of physiological functions like vomiting and vasoconstriction.

Serotonin is mostly present in the digestive system, although it is also found in blood platelets and the central nervous system. The comment that serotonin accomplishes nothing was made at one time. Serotonin has developed into a significant topic of study, a household name, and more difficult than ever as it enters its middle years. The indoleamine molecule is formed biochemically by hydroxylation of the 5 position on the ring (producing the intermediate 5-hydroxytryptophan) and then decarboxylation to create serotonin from the amino acid tryptophan.

Tryptophan, an important amino acid, is used to make serotonin. Low serotonin levels can be caused by a tryptophan shortage. Mood disorders, such as anxiety or sadness, might arise as a result of this. Serotonin is also stored in blood platelets and is released during agitation and vasoconstriction, acting as an agonist to other platelets. Anxiety, depression, schizophrenia, drug misuse, sleep, dreaming, hallucinogenic activity, headache, cardiovascular problems, and food management have all been linked to it, and it is currently dabbling in acupuncture and transcendental meditation.

The enterochromaffin cells in the GI tract, which govern intestinal motions, contain around 90% of the total serotonin in the human body. Two sets of researchers independently discovered serotonin in the late 1940s: It was referred to as serotonin in the United States and enteramine in Italy. In the early 1950s, its complete synthesis showed that both compounds were 5-hydroxytryptamine (5-HT). Platelets contain around 8%, while the CNS has about 1–2%.

Serotonin is released luminally and basolaterally, resulting in enhanced serotonin absorption by circulating platelets and activation following stimulation, resulting in greater myenteric neuron stimulation and gastrointestinal motility. Serotonin is a naturally occurring mood stabilizer. It’s the chemical that aids digestion, sleeping, and eating. The rest is made in the CNS’s serotonergic neurons, where it serves a variety of roles. Memory and learning are some of the cognitive activities of serotonin.

Serotonin (5-HT) has been found in a variety of plant and animal species, and it was first discovered in the central nervous system (CNS) of animals in the mid-1950s. This substance’s role as a neurotransmitter was later postulated. Enterochromaffin cells produce serotonin, which ultimately makes its way out of tissues and into the bloodstream. It is aggressively taken up and stored by blood platelets there. Later research linked 5-HT to a number of central and peripheral physiologic activities.

Serotonin is also a growth factor for some types of cells, suggesting that it may play a role in wound healing; serotonin receptors come in a variety of shapes and sizes. It appeared to have a role in vasoconstriction and vasodilation, body temperature control, sleep, and hormone balance, and data showed it might be implicated in depression. Serotonin is found in all bilateral animals, including worms and insects, as well as fungi and plants, in addition to mammals. The structural resemblance between 5-HT and (+)-lysergic acid diethylamide (LSD), a newly discovered hallucinogenic drug, piqued researchers’ interest.

Initially, serotonin was considered to be a sleep-promoting or “antiwaking” neurotransmitter. The discovery of multiple 5-HT receptor subtypes, each with its own anatomical distribution, necessitated the development of a more complicated role for serotonin. According to recent research, when the serotoninergic system becomes inactive, the requirements for sleep are now satisfied. Serotonin can also control serotonin production and release via binding to auto-receptors on presynaptic neurons.

Monoamine oxidase recycles or breaks down serotonin once it is absorbed back into the presynaptic neuron to cease its activity. The 5-HT1A and 5-HT2 receptors are thought to have a role in sleep through regulating sleep-promoting chemicals in the hypothalamus. A deeper knowledge of the role of serotonin in sleep will emerge when newer and more specific ligands for investigating the various serotonin receptor subtypes are developed.

Serotonin is a component of the stinging nettle (Urtica dioica) toxin, which induces pain when injected in the same way that it does in insect venoms. The physiological relevance of the massive quantities of serotonin produced and processed in the peripheral nervous system is still a mystery. Serotonin, a neurotransmitter found in the brain, has been linked to a number of different occurrences. Serotonin stimulates and modulates root growth in Arabidopsis thaliana in a variety of ways at varying doses.