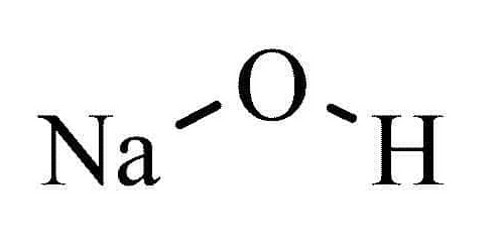 Sodium hydroxide is an alkali which is also known as caustic soda. Caustic means “burning” and caustic soda takes its name from the way it can burn the skin. It is a popular strong base used in the industry. It has the chemical formula of NaOH. It is a white solid ionic compound consisting of sodium cations Na+ and hydroxide anions OH−.

It is a base, meaning it has a high pH. It is the most common thing used to raise the pH of solutions; for example, to neutralize an acid. It is a highly versatile substance used in a variety of manufacturing processes.

As a solid, the alkali is deliquescent and readily absorbs moisture and carbon dioxide from the air. It dissolves easily in water and makes the water warm when this happens.

Sodium hydroxide is used as a solution called lye to make soap. It is used in many scenarios where it is desirable to increase the alkalinity of a mixture or to neutralize acids. Lye is also used to unclog drains. Its dissolving properties and its ability to easily break surface tension are fundamental for its uses. It works in two ways. First, it combines with grease to make soap. Second, it dissolves hair (which is soluble in any basic solution).

It is used to manufacture many everyday products, such as paper, aluminum, commercial drain and oven cleaners, and soap and detergents.