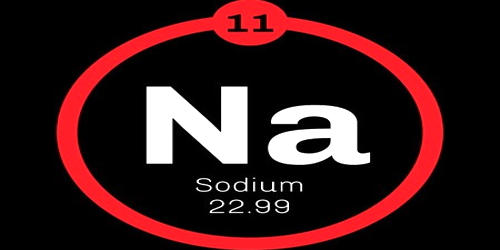 Sodium is a chemical element with the symbol Na and atomic number 11. It’s a soft metal, reactive, and with a low melting point, with a relative density of 0,97 at 20ºC (68ºF). It is a soft, silvery-white, highly reactive metal. It is the most common alkali metal and the sixth most abundant element on Earth, comprising 2.8 percent of Earth’s crust. It is the sixth most abundant element in the Earth’s crust and exists in numerous minerals such as feldspars, sodalite, and rock salt (NaCl). It is a compound of many foodstuffs, for instance of common salt. Many salts of sodium are highly water-soluble: sodium ions have been leached by the action of water from the Earth’s minerals over eons, and thus sodium and chlorine are the most common dissolved elements by weight in the oceans. The most important and familiar sodium compound is sodium chloride, or common salt, NaCl.

Sodium reacts quickly with water, and also with snow and ice, to produce sodium hydroxide and hydrogen. It is an important constituent of a number of silicate materials, such as feldspars and micas. When it’s exposed to air, metallic sodium recently cut looses its silvery appearance and acquires an opaque grey color due to the formation of a sodium oxide coating. It is highly reactive, forming a wide variety of compounds with nearly all inorganic and organic anions.

Sodium was first isolated by Humphry Davy in 1807 by the electrolysis of sodium hydroxide. Among many other useful sodium compounds, sodium hydroxide (lye) is used in soap manufacture, and sodium chloride (edible salt) is a de-icing agent and a nutrient for animals including humans. Pure sodium was first isolated by Sir Humphry Davy in 1807 through the electrolysis of caustic soda (NaOH). It is highly reactive, burns with a yellow flame, oxidizes in air, and reacts violently with water, forcing it to be kept under oil.