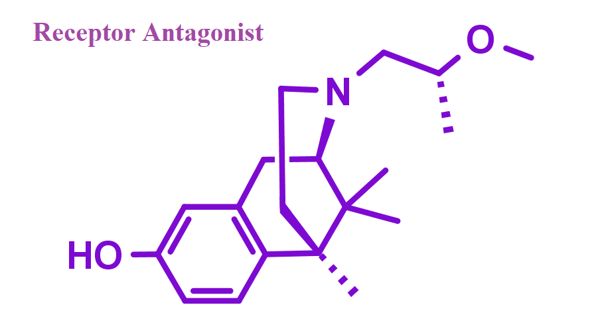 A receptor antagonist is a biological repressor molecule. It is a type of receptor ligand or drug that blocks or dampens a biological response by binding to and blocking a receptor rather than activating it like an agonist. This describes a ligand that, when binding to a neurotransmitter receptor, attenuates or completely blocks the neurotransmitter-mediated response, while on its own does not provoke a biological response. Pharmacological receptors can be divided into four superfamilies: ligand-gated ion channels, G-protein coupled receptor, direct enzyme-linked receptors, and intracellular receptors affecting gene transcription.

A receptor antagonist slows down the cell by stopping some of the cell reactions by clogging up the areas that make the cell work. Receptor antagonists are either soluble receptors that sequester the hormone or kinase-defective molecules that bind with intact receptors to produce a nonfunctional dimer. They are sometimes called blockers, such as beta blockers. This describes a ligand that, when binding to a neurotransmitter receptor, attenuates or completely blocks the neurotransmitter-mediated response, while on its own does not provoke a biological response.

An agonist binds to the receptor and produces an effect within the cell. An antagonist is a ligand that blocks or dampens a biological effect. An antagonist may bind to the same receptor, but does not produce a response, instead, it blocks that receptor to a natural agonist. It acts against an agonist. Antagonist drugs interfere in the natural operation of receptor proteins. They may block enzymes or passages through cell membranes. Antagonists mediate their effects by binding to the active site or to the allosteric site on a receptor, or they may interact at unique binding sites not normally involved in the biological regulation of the receptor’s activity.

Receptor antagonists, synthesis blockers, antibodies, and other inhibitors are often used to study the role of endogenous substances in sleep regulation. These drugs can be tested for effects on spontaneous sleep, or sleep induced by other manipulations, such as sleep deprivation or injection of a cytokine.

They are part of the homeostatic system which regulates the body’s physiology. The majority of drug antagonists achieve their potency by competing with endogenous ligands or substrates at structurally defined binding sites on receptors. Some are made for pharmaceutical uses.