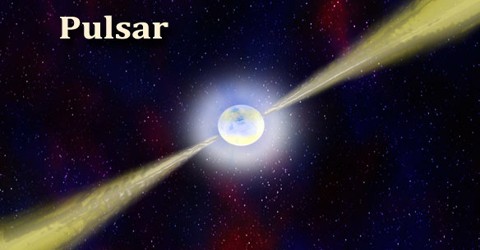 Pulsar is A rapidly spinning neutron star that emits radiation, usually radio waves, in narrow beams focused by the star’s powerful magnetic field and streaming outward from its magnetic poles. Pulsars are spherical, compact objects that are about the size of a large city but contain more mass than the sun. Pulsars are types of neutron stars; the dead relics of massive stars. What sets pulsars apart from regular neutron stars is that they’re highly magnetized, and rotating at enormous speeds. Astronomers detect them by the radio pulses they emit at regular intervals. A neutron star that regularly emits pulses of radiation is known as a pulsar. Pulsars are believed to be one of the candidates of the observed ultra-high-energy cosmic rays.

Pulsars radiate two steady, narrow beams of light in opposite directions. Although the light from the beam is steady, pulsars appear to flicker because they also spin. The reason a pulsar’s light beam spins around like a lighthouse beam is that the pulsar’s beam of light is typically not aligned with the pulsar’s axis of rotation. The first pulsar was discovered in 1967 by Jocelyn Bell Burnell and Antony Hewis, and it surprised the scientific community by the regular radio emissions it transmitted. They detected a mysterious radio emission coming from a fixed point in the sky that peaked every 1.33 seconds. These emissions were so regular that some astronomers thought it might be evidence of communications from an intelligent civilization.

The formation of a pulsar is very similar to the creation of a neutron star. When a massive star with 4 to 8 times the mass of our Sun dies, it detonates as a supernova. The outer layers are blasted off into space, and the inner core contracts down with its gravity. The gravitational pressure is so strong that it overcomes the bonds that keep atoms apart. Electrons and protons are crushed together by gravity to form neutrons. The gravity on the surface of a neutron star is about 2 x 1011 the force of gravity on Earth. So, the most massive stars detonate as supernovae, and can explode or collapse into black holes. If they’re less massive, like our Sun, they blast away their outer layers and then slowly cool down as white dwarfs. Pulsars spin because the stars from which they formed also rotate, and the collapse of the stellar material will naturally increase the pulsar’s rotation speed. The slowest pulsars ever detected spin on the order of once per second, and these are typically called slow pulsars. The fastest known pulsars can spin hundreds of times per second, and are known as fast pulsars or millisecond pulsars, because their spin period is measured in milliseconds.

The pulsar siphons matter and momentum from its companion, gradually increasing the spin rate of the pulsar. This is bad news for the companion star, which may be completely devoured by the pulsar. This would explain why millisecond pulsars have been discovered with no visible companion nearby.

When a pulsar first forms, it has the most energy and fastest rotational speed. As it releases electromagnetic power through its beams, it gradually slows down. Within 10 to 100 million years, it slows to the point that its beams shut off and the pulsar becomes quiet.

Pulsars help us search for gravitational waves, probe the interstellar medium, and even find extrasolar planets in orbit. It has even been proposed that spacecraft could use them as beacons to help navigate around the Solar System. Pulsars are fantastic cosmic tools for scientists to study a wide range of phenomena. The light emitted by a pulsar carries information about these objects and what is happening inside them. Some pulsars also prove extremely useful because of the precision of their pulses. There are many known pulsars that blink with such precise regularity; they are considered the most accurate natural clocks in the universe.

Pulsars are moving through space while also blinking a regular number of times per second, scientists can use many pulsars to calculate cosmic distances. The changing position of the pulsar means the light it emits takes more or less time to reach Earth. Thanks to the exquisite timing of the pulses, scientists have made some of the most accurate distance measurements of cosmic objects.