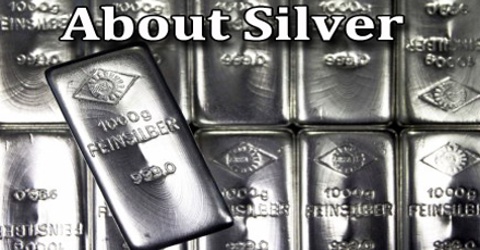 Silver is a soft, shiny, white metallic element that is found in many ores, especially together with copper, lead, and zinc. It conducts heat and electricity better than any other metal. Its atomic number 47; atomic weight 107.868; melting point 960.8°C; boiling point 2,212°C; specific gravity 10.50; valence 1, 2. The element known to scientists as Ag, or silver, is rare and valuable, and was once used to make money. 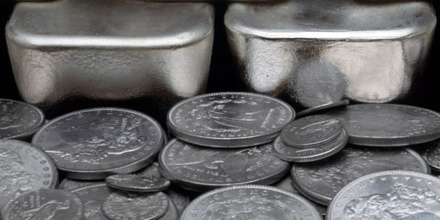 It was discovered was discovered in Ancient times and used by the ancient South Americans, Asians, Egyptians, Greeks, Romans and Chinese. It is mentioned in the Bible. Silver is one of the metals referred to as one of the ‘Metals of Antiquity’. The ancient ‘Metals of Antiquity’ together with their approximate dates of discovery and use are Gold (6000BC), Copper (9000BC), Silver (4000BC), Lead (6400BC), Tin (3000BC), Iron (1500BC) and Mercury (1500BC).

Silver metal is used in many bullion coins, sometimes alongside gold: while it is more abundant than gold, it is much less abundant as a native metal. Its purity is typically measured on a per-mille basis; a 94%-pure alloy is described as “0.940 fine”. As one of the seven metals of antiquity, silver has had an enduring role in most human cultures.

Element and Properties of Silver

Silver is one of the scarcest elements. A lustrous white, ductile, malleable metallic element, occurring both uncombined and in ores such as argentite, having the highest thermal and electrical conductivity of the metals, but its greater cost has prevented it from being widely used for electrical purposes. Silver’s atomic symbol is Ag, which seems to bear little relation to the name of the element. In fact, Ag is short for argentums, the Latin word for silver. The word “silver” is from the Anglo-Saxon word seolfor. 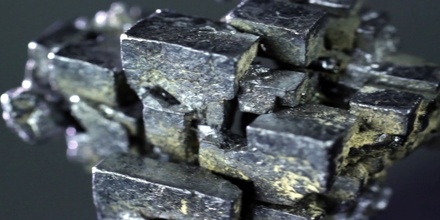 Silver occurs uncombined, and in ores such as argentite and chlorargyrite (horn silver). However, it is mostly extracted from lead-zinc, copper, gold and copper-nickel ores as a by-product of mining for these metals. The metal is recovered either from the ore, or during the electrolytic refining of copper. World production is about 20,000 tonnes per year.

Most silver used today is obtained from its ores, including argentite. The leading producers are Mexico, USA, Russia, Australia and Canada. Silver is prepared in various ways depending upon the nature of its occurrence but especially in connection with the refining of lead and copper. It is highly valued for jewelry, tableware, and other ornamental use and is used in coinage, photography, dental and soldering alloys, electrical contacts, and printed circuits. 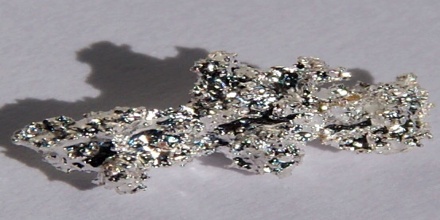 Silver is a heavy, rather soft, white metal, very ductile and malleable and capable of taking a high polish. It surpasses all other metals as a conductor of heat and electricity, but is too costly to find extensive use for such purposes. It melts at a little lower temperature than Copper (961°). It alloys readily with other heavy metals, and when it is to be used for coinage a small amount of copper, from 8 to 10%, is nearly always melted with it to give it hardness.

Silver is used to make mirrors, as it is the best reflector of visible light known, although it does tarnish with time. It is also used in dental alloys, solder and brazing alloys, electrical contacts and batteries. Silver paints are used for making printed circuits. Silver is also used in medicine for its caustic, astringent, and antiseptic effects. 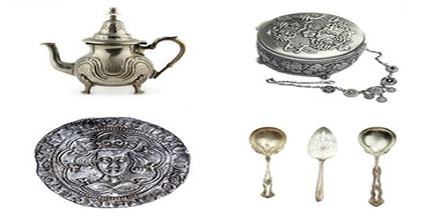 Silver bromide and iodide were important in the history of photography, because of their sensitivity to light. Even with the rise of digital photography, silver salts are still important in producing high-quality images and protecting against illegal copying. Light-sensitive glass (such as photochromic lenses) works on similar principles. It darkens in bright sunlight and becomes transparent in low sunlight.

Silver has antibacterial properties and silver nanoparticles are used in clothing to prevent bacteria from digesting sweat and forming unpleasant odours. Silver threads are woven into the fingertips of gloves so that they can be used with touchscreen phones.