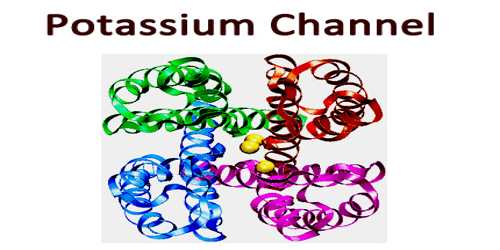 Potassium channels are designed to allow the flow of potassium ions across the membrane but to block the flow of other ions–in particular, sodium ions. They form potassium-selective pores that span cell membranes. Furthermore, potassium channels are found in most cell types and control a wide variety of cell functions. Two common examples of ion channels at work are seen in muscle contraction, which is started by the release of calcium ions, and nerve signaling, which involves a complex flow of sodium and potassium ions. 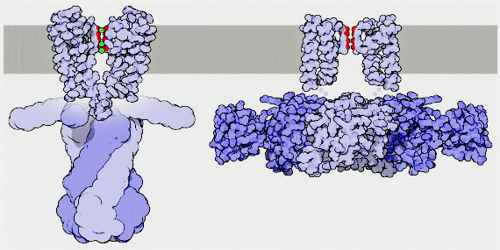 Structure and Functions of Potassium Channel

Potassium channels are typically composed of two parts: the filter, which selects and allows potassium but not sodium to pass, and the gate, which opens and closes the channel based on environmental signals. Potassium channels located in cell membranes and control transportation of K+ ions efflux from and influx into cells. They play crucial roles in both excitable and non-excitable cells and can be found in virtually all species, except for some parasites. The first atomic structure of a prokaryotic potassium channel (KcsA, a channel from Streptomyceslividans) was determined, tremendous progress has been made in understanding the mechanism of potassium channels and channels conducting other ions. 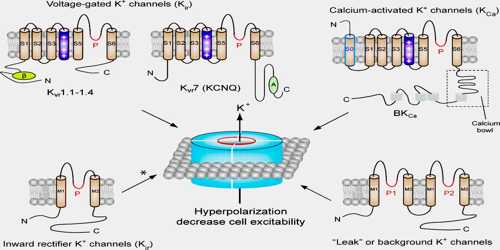 There are over 80 mammalian genes that encode potassium channel subunits. However, potassium channels found in bacteria are amongst the most studied of ion channels, in terms of their molecular structure. Using X-ray crystallography, profound insights have been gained into how potassium ions pass through these channels and why (smaller) sodium ions do not. The selectivity filter is formed by a five residue sequence, TVGYG, termed the signature sequence, within each of the four subunits. This signature sequence is within a loop between the pore helix and TM2/6, historically termed the P-loop. This signature sequence is highly conserved, with the exception that a valine residue in prokaryotic potassium channels is often substituted with an isoleucine residue in eukaryotic channels.

The mechanism of potassium channel selectivity remains under continued debate. The carbonyl oxygens are strongly electro-negative and cation-attractive. The filter can accommodate potassium ions at 4 sites usually labeled S1 to S4 starting at the extracellular side. The mechanism for ion translocation in KcsA has been studied extensively by theoretical calculations and simulation. The prediction of an ion conduction mechanism in which the two doubly occupied states (S1, S3) and (S2, S4) play an essential role has been affirmed by both techniques. MD simulations suggest the two extracellular states, Sext and S0, reflecting ions entering and leaving the filter, also are important actors in ion conduction.

Potassium channels function to conduct potassium ions down their electrochemical gradient, doing so both rapidly and selectively. Biologically, these channels act to set or reset the resting potential in many cells. In excitable cells, such as neurons, the delayed counterflow of potassium ions shapes the action potential. 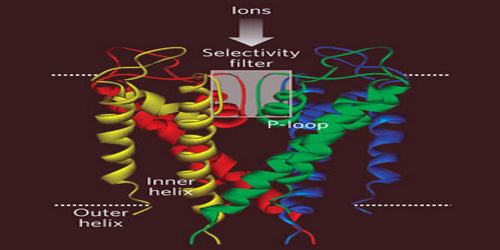 Hundreds of different ion channels are made by living cells, for a variety of different functions. Ion channels play a critical role in signaling by nerves, so any blockage of these channels can have serious effects. Scorpions take advantage of this to paralyze their prey. Scorpion venom includes a collection of powerful neurotoxins that bind to ion channels and block the flow of ions.