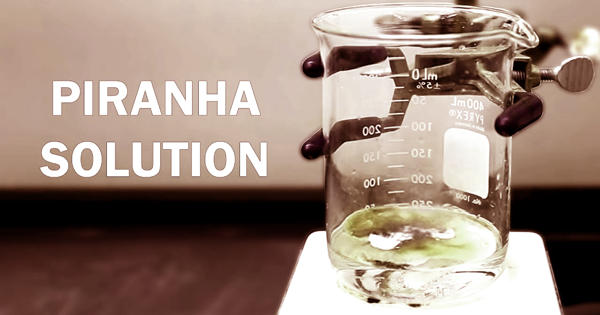 Piranha solution is a popular name for a solution of Caro’s acid, which is usually prepared by reacting sulfuric acid and hydrogen peroxide; it is used to clean organic residues from glassware or other acid-resistant materials. It is also known as piranha etch, is a mixture of sulfuric acid (H2SO4), water, and hydrogen peroxide (H2O2), used to clean organic residues off substrates. Piranha solutions are a mixture of concentrated sulfuric acid with hydrogen peroxide, usually in a ratio of 3:1 to 7:1. Because the mixture is a strong oxidizing agent, it will remove most organic matter, and it will also hydroxylate most surfaces (add OH groups), making them highly hydrophilic (water-compatible). They are used to remove trace amounts of organic residues, such as photoresist, from substrates. This means the solution can easily dissolve fabric and skin causing severe chemical burns in the process.

Piranha solution must be prepared with great care. It is highly corrosive and an extremely powerful oxidizer. Because piranha solutions are highly corrosive and oxidizing mixtures of sulfuric acid, peroxymonosulfuric, and hydrogen peroxide, they react violently with organic material and can cause an explosion. Surfaces must be reasonably clean and completely free of organic solvents from previous wash steps before coming into contact with the solution. In addition, gas evolution can lead to pressure build-up and explosion if the solution is stored in a closed container.

Piranha solution should always be prepared by adding hydrogen peroxide to sulfuric acid slowly, never in reverse. These are extremely energetic and may result in explosion or injury resulting from chemical and thermal burns if not handled with extreme caution. Mixing the solution is extremely exothermic. If the solution is made rapidly, it will instantly boil, releasing large amounts of corrosive fumes. Piranha solutions may irritate the respiratory tract if vapor is inadvertently inhaled. Even when made with care, the resultant heat can bring solution temperatures above 100 °C. It must be allowed to cool reasonably before it is used. The sudden increase in temperature can also lead to violent boiling of the extremely acidic solution. Solutions made using hydrogen peroxide at concentrations greater than 50% may cause an explosion. Once the mixture has stabilized, it can be further heated to sustain its reactivity.

The solution may be mixed before application or directly applied to the material, applying the sulfuric acid first, followed by the peroxide. Due to the self-decomposition of hydrogen peroxide, piranha solution should be used freshly prepared.