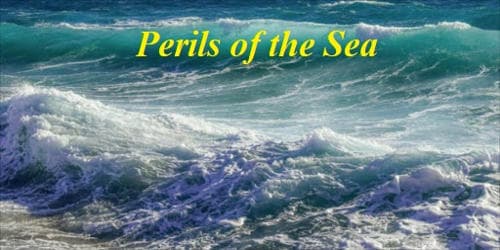 Perils of the Sea

Perils of the Sea refers to extraordinary forces of nature that maritime ventures might encounter in the course of a voyage. The term ‘perils of the sea’ used in marine policy do not include every casualty, which may occur to the subject matter of the insurance on the sea. It means perils of the sea include those accidents or casualties which do not happen due to the free will of a human being. Some examples of these perils include stranding, sinking, collision, heavy wave action, and high winds.

Here, perils of the sea in marine insurance include extraordinary forces of nature which maritime ventures might need to face during the voyage. If the loss takes place on account of any of the perils insured against the insurer, the insurer will be liable for it and shall have to make good the losses to the assured. If the peril is insured, the insurer will indemnify the assured, otherwise not. The doctrine of causa-Proxima is to be applied while calculating the amount of loss. Broadly speaking, ‘peril of the sea’ is defined to cover everything that happens to ship during the voyage by the Acts of God. To sum up, perils of the sea mean everything which happens to the vessel during the voyage by the Act of God without any intervention of a human.

Further, ‘perils of the sea’ in marine insurance comprise of losses only to goods which are on board that happens due to some irresistible force or natural cause or from the overwhelming power which is beyond the human skill and prudence. It includes only the casualties that result from the violent action of the elements as distinguished from the silent natural and gradual action of the elements upon the vessel itself. Thus the insurer will be liable only if the loss or damage is the proximate result of the fortuitous accident of the sea, e.g., the action of storm, cyclone, and waves, etc. Here are some of the instances which are covered under perils of the sea are-