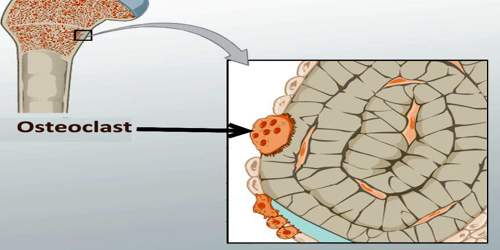 Osteoclast is a specialized bone cell that absorbs bone, allowing for the deposition of new bone and maintenance of bone strength. The osteoclast disassembles and digests the composite of hydrated protein and mineral at a molecular level by secreting acid and a collagenase, a process known as bone resorption. This process also helps regulate the level of blood calcium. 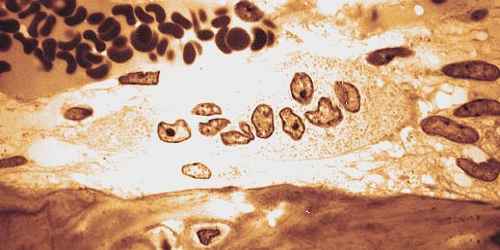 Bone is a dynamic tissue that is continuously being broken down and restructured in response to such influences as structural stress and the body’s requirement for calcium. The osteoclasts are the mediators of the continuous destruction of bone. Osteoclasts occupy small depressions on the bone’s surface, called Howship lacunae; the lacunae are thought to be caused by erosion of the bone by the osteoclasts’ enzymes. 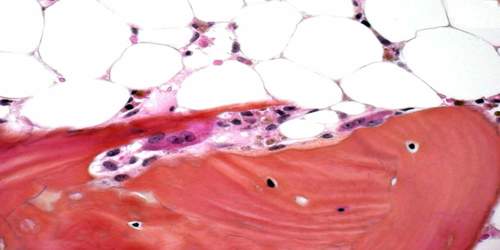 Structure and Functions of Osteoclast

Osteoblasts make bone in response to growth factors and mechanical stress on the bone. Counteracting the osteoblast activity are osteoclasts – the bone reabsorbing cells. Osteoclasts make and secrete digestive enzymes that break up or dissolve the bone tissue. Osteoclasts then take up or ‘absorb’ the bone debris and further break it down inside the cell. The collagen is broken down into amino acids, which are recycled to build other proteins, while the calcium and phosphate are released to be used elsewhere in the body.

An osteoclast is a large multinucleated cell and human osteoclasts on bone typically have five nuclei and are about 150-200 µm in diameter. When osteoclast-inducing cytokines are used to convert macrophages to osteoclasts, very large cells that may reach 100 µm in diameter occur. Osteoclasts are characterized by a cytoplasm with a homogeneous, “foamy” appearance. This appearance is due to a high concentration of vesicles and vacuoles. These vacuoles include lysosomes filled with acid phosphatase. This permits characterization of osteoclasts by their staining for high expression of tartrate resistant acid phosphatase (TRAP) and cathepsin K. Osteoclast rough endoplasmic reticulum is sparse, and the Golgi complex is extensive. 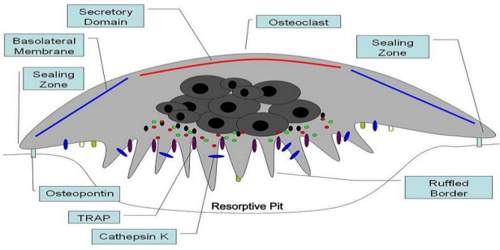 The loss of function in osteoclasts, problems with their differentiation and decrease in their number lead to bone osteosclerosis/osteopetrosis. It has been demonstrated that bone destruction and hypercalcemia induced by metastatic tumors are carried out by osteoclasts activated by the tumor cells, and the inhibition of osteoclast formation prevents the bone destruction and even bone metastasis. Abnormal osteoclast function is closely related to various diseases.