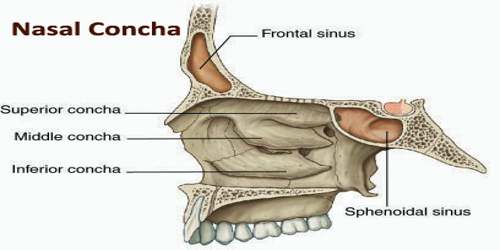 Nasal concha also called Turbinate, or Turbinal, any of several thin, scroll-shaped bony elements forming the upper chambers of the nasal cavities. The conchae are shaped like an elongated seashell, which gave them their name (Latin concha from Greek κόγχη). A turbinate bone is any of the scrolled spongy bones of the nasal passages in vertebrates. In higher vertebrates the olfactory epithelium is associated with these upper chambers, resulting in keener sense of smell. The components of the nasal conchae are the inferior, medial, superior, and supreme turbinates. 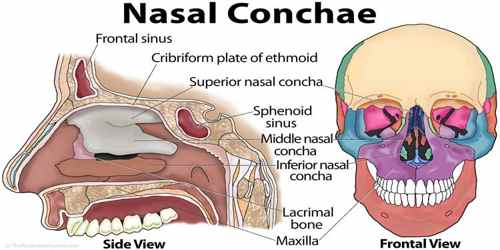 In humans, who are less dependent on the sense of smell, the nasal conchae are much reduced. The turbinates divide the nasal airway into 4 groove-like air passages, and are responsible for forcing inhaled air to flow in a steady, regular pattern around the largest possible surface area of nasal mucosa, which, as a ciliated mucous membrane with shallow blood supply, cleans and warms the inhaled air in preparation for the lungs.

Structure and Functions of Nasal Concha

The three pairs of conchae on eitherside of the nasal cavity project horizontally into the breathing space, dividing it into the inferior, middle and superior meatuses and the sphenoethmoidal recess. Each pair, placed over and facing toward the corresponding meatus, is identified by different names, depending on its location:

The superior and middle turbinates both originate from the cranial region of the skull, being considered structural parts of the cranial bones. 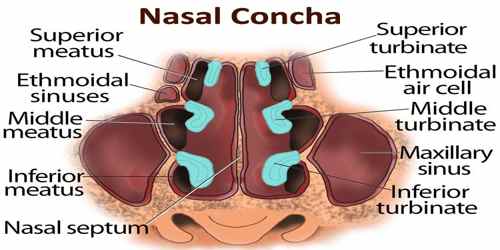 There is sometimes a pair of supreme turbinates superior to the superior turbinates. When present, these usually take the form of a small crest.

The nasal conchae or turbinates are named this way because they function in a similar way as a turbine, being principally responsible for regulating the air flow during inhalation. The bones expand the surface area of the nasal cavity, allowing the air to come into better contact with the cavity walls. They also slow down the laminar flow of air through the breathing passages, so the air spends a longer time in the cavity in order to be dehumidified.

Another function of the nasal conchae is channeling the air entering the respiratory system to go through the mucous membrane and cilia to be filtered and warmed up properly.

The turbinates are also responsible for filtration, heating, and humidification of air inhaled through the nose. Of these three, filtration is achieved mostly by other more effective means such as mucous and cilia. As air passes over the turbinate tissues, it is heated to 32 – 34 °C (89 – 93 °F), humidified (up to 98% water saturation) and filtered.

There are various nasal decongestants, antihistamines and nasal steroids that can be used to treat the condition. However, severe cases may call for a surgical procedure for the reduction of the nasal turbinates. 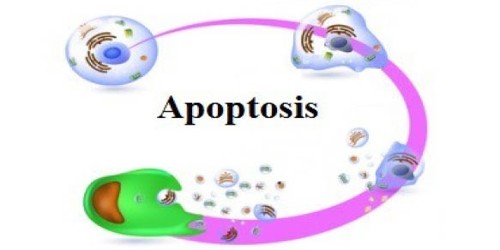 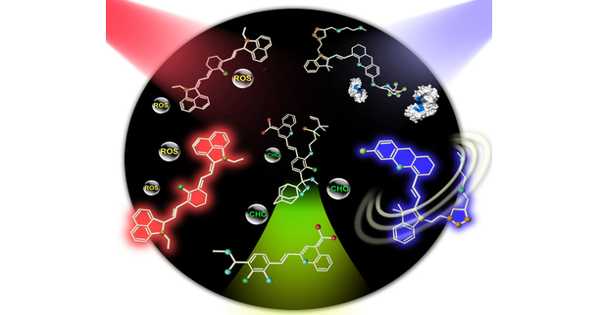