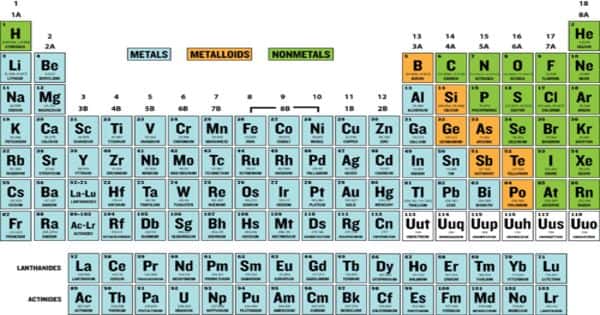 A metalloid is an element that has properties that are intermediate between those of metals and nonmetals. It is also known as semimetal is a chemical element. Metalloids are elements that have the properties of both metal and non-metal elements. These are a very small group of elements found in the periodic table of elements along the zig-zag line that distinguishes metals from non-metals and is drawn from between boron and aluminum to the border between polonium and astatine. It might be shiny, but brittle. It might be dull but conducts electricity.

A metalloid is an element intermediate in properties between the typical metals and nonmetals. It is a nonmetal that can combine with a metal to form an alloy.

The six commonly recognized metalloids are boron, silicon, germanium, arsenic, antimony, and tellurium. The most common semimetal is silicon. Silicon has electrical conductivity between metals and nonmetals. It is a semiconductor. Most metalloids behave as semiconductors. In general, metalloids have a metallic luster. Metalloids have low elasticity, they are very brittle. 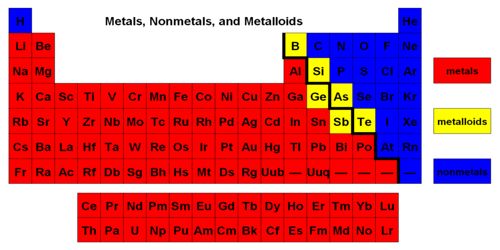 An approximate way to classify metalloids is to look at the Periodic Table of elements. On the periodic table, the elements colored yellow, which generally border the stair-step line, are considered to be metalloids. See the double diagonal line: top left Boron and Aluminium, bottom right Polonium and Astatine. In the periodic table metalloids form a jagged zone dividing elements that have clear metallic properties from elements that have clear nonmetallic properties. Those diagonals are the metalloids. Some metalloids are not semimetals, and some semimetals are not metalloids.

Metalloids typically behave as nonmetals in chemical reactions, and they can create alloys with metals. Chemically, metalloids correspond to atoms having intermediate electronegativities and an ability to display a range of both positive and negative oxidation states in their compounds. They are usually brittle, and they are also typically solid, only becoming non-solid under uncommon conditions. 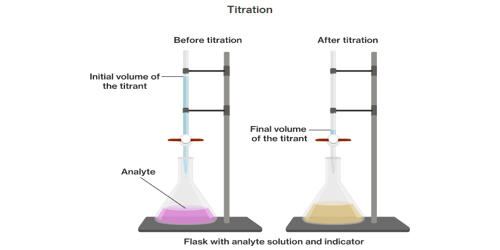