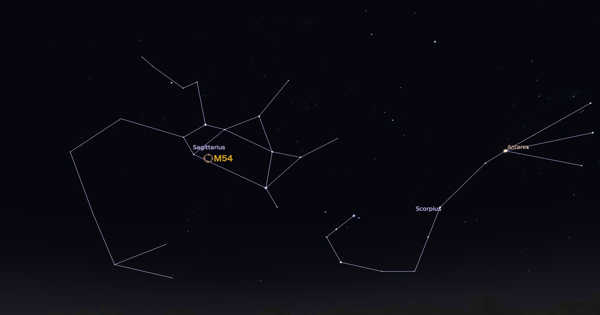 Messier 54 – a Globular Cluster in the Constellation Sagittarius

Despite the fact that M54 is now thought to be outside the Milky Way, it will eventually become a part of our galaxy. Our large galaxy’s strong gravitational pull is slowly engulfing the Sagittarius dwarf galaxy, which will eventually merge with the Milky Way to form one larger galaxy.

M54 is easily visible in the sky because it is close to the star Sagittarii. Individual stars are not visible through amateur telescopes. It is located in or near the center of SagDEG. Some authors believe it is the core, while others do not. A team of astronomers discovered evidence of a medium-sized black hole in the core of M54 in July 2009.

Previously thought to be part of the Milky Way at a distance of about 50,000 light-years from Earth, it was discovered in 1994 that M54 most likely belongs to the Sagittarius Dwarf Elliptical Galaxy (SagDEG), making it the first globular cluster previously thought to be part of our galaxy to be reassigned to extragalactic status, even if it was not recognized as such for nearly two and a quarter-century. Because it is located in the center of SagDEG, some authors believe it is its core; however, others believe it is a real globular cluster that fell to the center of this galaxy due to orbit decay caused by dynamical friction.

M54 is now estimated to be 87,000 light-years away, corresponding to a true radius of 150 light-years across. It is one of the denser globulars, belonging to class III (I being densest and XII being the least dense). It has an absolute magnitude of 10.0 and a luminosity of approximately 850,000 times that of the Sun.