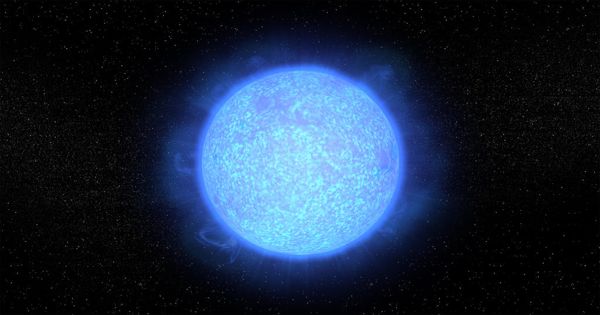 The Pistol Star is a blue hypergiant. One of the intrinsically brightest stars in our galaxy appears as the bright white dot in the center of this image taken with NASA’s Hubble Space Telescope. It is one of the most luminous stars in the Milky Way galaxy. It is approximately 25,000 light-years from Earth near the center of the Milky Way galaxy. Without the interstellar dust and the surrounding nebulosity, the Pistol Star would be visible to the naked eye, shining at 4th magnitude from a distance of 25,000 light-years.

It is one of many massive young stars in the Quintuplet cluster in the central region of our galaxy. The radiant star has enough raw power to blow off two expanding shells (magenta) of gas equal to the mass of several of our suns. It is about 25,000 light-years from Earth in the direction of Sagittarius. It is not visible to the eye but is located in the direction of the constellation Sagittarius, hidden behind the great dust clouds along the Milky Way. It would be visible to the naked eye as a fourth magnitude star but interstellar gases have blocked it from view.

The Pistol Star is a blue hypergiant star located about 25,000 light-years from Earth in the constellation Sagittarius. It is the central star in the Pistol Nebula and was named after the nebula’s shape.

The Pistol Star was discovered by the Hubble Space Telescope in the early 1990s. The most powerful telescopes cannot see the Pistol star in visible wavelengths. The star may have ejected almost 10 solar masses of material in giant outbursts perhaps 4,000 to 6,000 years ago. But 10 percent of the infrared light leaving the Pistol star reaches Earth, putting it within reach of infrared telescopes, such as the Near Infrared Camera and Multi-Object Spectrometer (NICMOS) on board Hubble. Its stellar wind is over 10 billion times stronger than the Sun’s.

The star’s exact age and future are not known, but it is expected to end in a brilliant supernova or hypernova in 1 to 3 million years. The Pistol Star was first noted in the early 1990s, but its relationship to the nebula was not realized until 1995 when Figer proposed in his Ph.D. thesis that the “past eruptive stages of the star” might have created the nebula. Its mass is equally uncertain, probably around 200 times the sun when first formed. Now it is much less because it has lost so much mass. The Hubble spectrometer results confirm this conclusion.

Early reports suggested that it might be the most luminous star known, being almost 100 million times as luminous as the Sun. Later studies, however, have reduced its estimated luminosity. The astronomers believe that the Pistol nebula was created by eruptions in the outer layers of the star which ejected up to 10 solar masses of material in giant outbursts about 4,000 and 6,000 years ago. It is now regarded as a candidate luminous blue variable about one-third as luminous as the binary star system Eta Carinae. The star will continue to lose more material, eventually revealing its bare hot core, sizzling at 100,000 degrees. Even so, it radiates about as much energy in 20 seconds as does the Sun in a year.

A close point source has been discovered hidden in the surrounding nebulosity, but it is not known whether it is a star or even whether it is physically associated. The Pistol Star is not visible to the eye, but is located in the direction of the constellation Sagittarius, hidden behind the great dust clouds along the Milky Way.