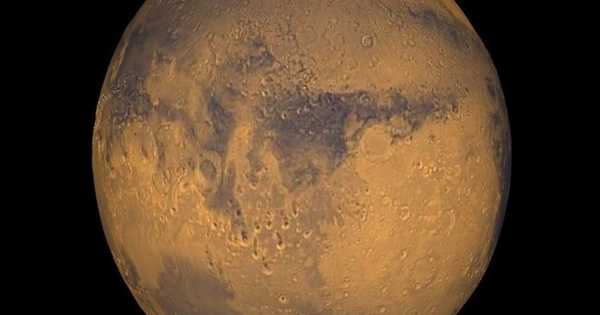 Mars Explorers may benefit from a new Water Treatment Technology

A team developed a catalyst from molybdenum fertilizer that reduces more than 99.9 percent of perchlorate in water and could be used to clean soil on Mars and produce oxygen for human explorers. Engineers at the University of California, Riverside have developed a catalyst to remove a dangerous chemical from water on Earth, which could also make Martian soil safer for agriculture and help human Mars explorers produce oxygen. The findings appeared in the Journal of the American Chemical Society.

Perchlorate, a negative ion composed of one chlorine atom bonded to four oxygen atoms, occurs naturally in some Earth soils and is particularly abundant on Mars. Perchlorate is also manufactured and used as a powerful oxidizer in solid rocket fuel, fireworks, munitions, airbag initiators for vehicles, matches, and signal flares. Some disinfectants and herbicides contain it as a byproduct.

Perchlorate is a common water contaminant that causes certain thyroid disorders due to its prevalence in both soil and industrial goods. Perchlorate bioaccumulates in plant tissues, and a high concentration of perchlorate in Martian soil could render food grown there unsafe to consume, limiting the possibility of human settlements on Mars. Perchlorate in Martian dust may also pose a risk to explorers. Current methods of removing perchlorate from water necessitate either harsh conditions or a multistep enzymatic process to convert the chlorine element’s oxidation state into the harmless chloride ion.

Engineers have developed a catalyst to remove a dangerous chemical from water on Earth that could also make Martian soil safer for agriculture and help produce oxygen for human Mars explorers.

Ren and Liu discovered that in oxygen-depleted environments, anaerobic microbes use molybdenum in their enzymes to reduce perchlorate and harvest energy. “Previous efforts to build a chemical molybdenum catalyst for perchlorate reduction were unsuccessful,” Liu explained. “Many other metal catalysts are either incompatible with water or require harsh conditions.”

The researchers attempted to replicate the complex microbial perchlorate reduction process using a simplified method. They discovered that by combining a common fertilizer called sodium molybdate, a common organic ligand called bipyridine to bind the molybdenum, and a common hydrogen-activating catalyst called palladium on carbon, they could create a powerful catalyst that quickly and efficiently broke down the perchlorate in water using hydrogen gas at room temperature with no combustion.

“This catalyst is much more active than any other chemical catalyst reported to date,” Ren said, “and reduces more than 99.99 percent of the perchlorate into chloride regardless of the initial perchlorate concentration.”

The new catalyst reduces perchlorate at a wide range of concentrations, from less than one milligram per liter to ten grams per liter. This makes it suitable for use in a variety of scenarios, including the remediation of contaminated groundwater, the treatment of heavily contaminated wastewater from explosives manufacturing, and the colonization of Mars.

“A convenient catalytic reduction system may help harvest oxygen gas from perchlorate washed from the Martian soil when the catalyst is coupled with other processes,” Liu said.

The researchers, who were funded by the National Science Foundation in the United States, used a simplified approach to mimic the complex microbial perchlorate reduction process. They discovered a powerful catalyst by combining a common fertilizer called sodium molybdate, a common hydrogen-activating catalyst called palladium on carbon, and a common organic ligand called bipyridine to bind the molybdenum. This catalyst quickly and efficiently degraded perchlorate in water using hydrogen gas at room temperature and without the use of combustion.

“While NSF is focused on supporting new, innovative research like this to help address the nation’s water needs, it’s also a great example of the broader benefits to society that result from basic water science supported by the agency’s Environmental Engineering Program,” said Karl Rockne, a program director in NSF’s Directorate for Engineering.