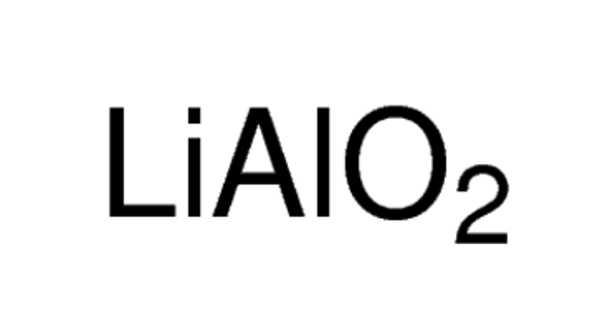 Lithium aluminate is a layered double hydroxide (LDH) with the same crystal structure as hydrotalcite. At high pH (12.5 – 13.5), lithium aluminate solubility is much lower than that of aluminum oxides. Lithium nitrate is sometimes used as an additive to cement in the conditioning of low- and intermediate-level radioactive waste (LILW) to reduce aluminum corrosion at high pH and subsequent hydrogen production. When lithium nitrate is added to cement, a passive layer of LiH(AlO2)2 •5 H2O forms on the surface of metallic aluminum waste immobilized in mortar.

The lithium aluminate layer, which is also a pore filler, is insoluble in cement pore water and protects the underlying aluminum oxide covering the metallic aluminum from dissolution at high pH. This inhibits the oxidation of aluminum by water protons and reduces the rate of hydrogen evolution by a factor of ten.

Although solid-state reactions have been used to create lithium aluminate polymorphs, these ceramics typically exhibit limitations due to a lack of control over particle size, morphology, and specific surface area.