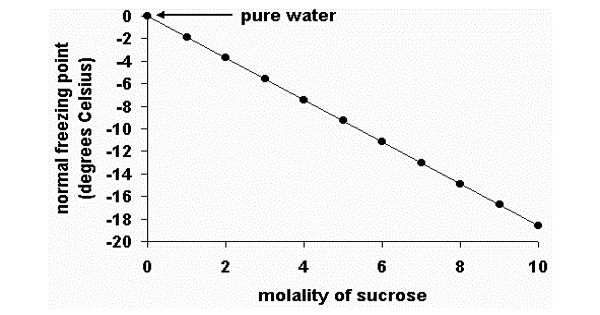 Freezing point depression is the phenomena that describes why adding a solute to a solvent results in the lowering of the freezing point of the solvent. It is a drop in the temperature at which a substance freezes, caused when a smaller amount of another, non-volatile substance is added. When a substance starts to freeze, the molecules slow down due to the decreases in temperature, and the intermolecular forces start to take over. Examples include adding salt into water (used in ice cream makers and for de-icing roads), alcohol in water, ethylene or propylene glycol in water (used in antifreeze in cars), or the mixing of two solids such as impurities into a finely powdered drug. In order to achieve a solid, the solution must be cooled to an even lower temperature.

Freezing point depression refers to the lowering of the freezing point of solvents upon the addition of solutes. It is a colligative property of solutions that is generally proportional to the molality of the added solute.

Freezing-point depression depends on the concentration of the solute. It follows the colligative laws of thermodynamics at low concentrations added to water. In all cases, the substance added/present in smaller amounts is considered the solute, while the original substance present in a larger quantity is thought of as the solvent. At the same time, the boiling point generally will be increased. The resulting liquid solution or solid-solid mixture has a lower freezing point than the pure solvent or solid because the chemical potential of the solvent in the mixture is lower than that of the pure solvent, the difference between the two is proportional to the natural logarithm of the mole fraction. The freezing point depression can be readily explained from the theory of phase equilibria in thermodynamics.

In a similar manner, the chemical potential of the vapor above the solution is lower than that above a pure solvent, which results in boiling-point elevation. The freezing point is the temperature at which the liquid changes to a solid. Freezing-point depression is what causes seawater, (a mixture of salt and other compounds in water), to remain liquid at temperatures below 0 °C (32 °F), the freezing point of pure water. At a given temperature, if a substance is added to a solvent (such as water), the solute-solvent interactions prevent the solvent from going into the solid phase.