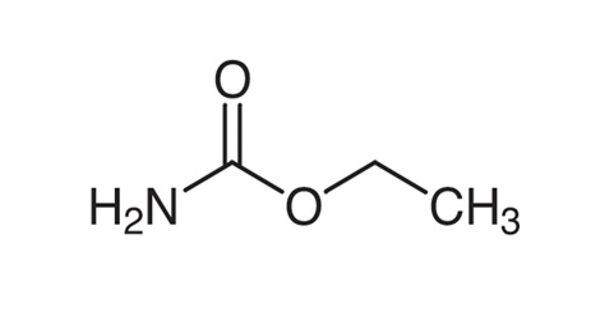 Ethylcarbamate is a compound that can naturally occur in fermented foods and beverages. It is also called urethane, which is an organic compound with the formula CH3CH2OC(O)NH2. It is a synthetic crystalline compound used in making pesticides and fungicides, and formerly as an anesthetic. It is an ester of carbamic acid and a white solid. It is an ethyl ester of carbamic acid. It was used as a hypnotic in man and an anesthetic in animals in the 1940s.

Despite its name, it is not a component of polyurethanes. It often occurs in alcoholic beverages (in particular stone fruit brandies). Because it is a carcinogen, it is little used, but it naturally forms in low quantities in many types of fermented foods and drinks. It is formed by ethanol and certain precursors in the fruit mash under the influence of light during the distillation process.

Ethyl carbamate is naturally formed in fermented foods and alcoholic beverages during the fermentation process and/or during storage. It is a colorless odorless crystalline ester that is used in the manufacture of pesticides, fungicides, and pharmaceuticals.

Formerly, it was used as a chemical intermediate in the preparation of amino resins, which were in turn used as crosslinking agents for permanent-press textile treatments to create “wash-and-wear” fabrics. It has also been used as an antineoplastic agent. Other uses included as solvent or intermediary in the manufacture of pesticides, cosmetics, and pharmaceuticals.

Occurrence in beverages and food

Other foods and beverages prepared by means of fermentation also contain ethyl carbamate. For example, bread has been found to contain 2 ppb; as much as 20 ppb has been found in some samples of soy sauce. The formation of several EC precursors, such as urea, citrulline, and carbamoyl phosphate, has aided the development of biochemical approaches to generate EC using yeasts and lactic acid bacteria. Amounts of both ethyl carbamate and methyl carbamate have also been found in wines, sake, beer, brandy, whiskey and other fermented alcoholic beverages.