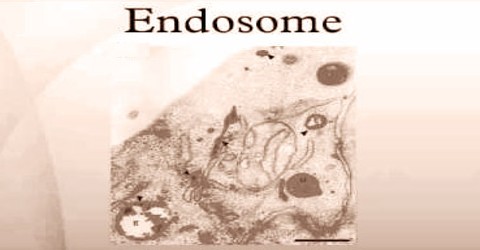 Endosome is a smooth sac within the cell, formed by or fused with coated vesicles that shed their clathrin, in which ligands are separated from their receptors and from which the receptors are returned to the cell surface. 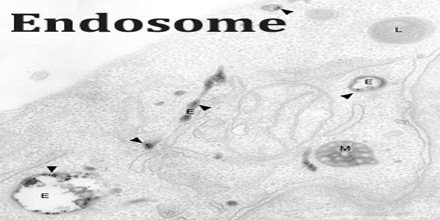 It is a compartment of the endocytic membrane transport pathway originating from the Trans Golgi membrane. Molecules or ligands internalized from the plasma membrane can follow this pathway all the way to lysosomes for degradation, or they can be recycled back to the plasma membrane. Molecules are also transported to endosomes from the trans-Golgi network and either continue to lysosomes or recycle back to the Golgi.

Regardless of the mechanism of initial formation, the newly formed Endosomes continue to undergo a multitude of changes. As a result, by the time they fuse with lysosomes some 10–40 min later, they have completed a remarkable transformation leaving them with few similarities to Earey Endosomes. The maturation process involves exchange of membrane components, movement to the perinuclear area, a shift in choice of fusion partners, formation of additional ILVs, a drop in lumenal pH, acquisition of lysosomal components, and a change in morphology. The programme is closely coordinated and regulated by factors recruited to the surface of the limiting membrane from the cytosol. 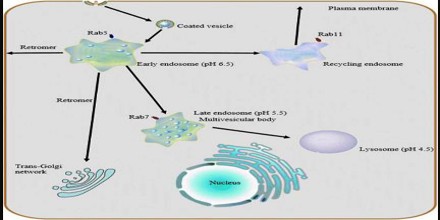 Since lysosomes constitute a point-of-no-return for most macromolecules and lipids, the cargo contents of Late Endosomes must be narrowed down to molecules and particles that need to be degraded, and to cargo that the Late Endosomes and lysosomes require for their functionality. Some of the membrane-bound cargo, moreover, needs to be presented in a form easily digested by hydrolases, which may explain in part the formation and the composition of ILVs. The limiting membrane of the Late Endosomes must, on the other hand, be rendered resistant to the hydrolases by inclusion of lysosomal glycoproteins such as LAMPs. Moreover, interactions with the cytoskeleton have to be altered so that the Late Endosomes can move to the region of the cytoplasm where the lysosomes are localized. Late Endosomes also need new tethering factors and SNAREs to be able to fuse with each other, with lysosomes, and perhaps with macropinosomes and autophagosomes. 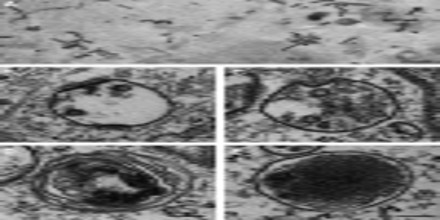 The Logistics of the Endosome System

‘Stripped-Down’ representation is the classical endocytic pathway has only a few elements. The elements include a recycling circuit for plasma membrane components and their ligands, a degradative system for digestion of macromolecules, and a connecting, unidirectional feeder pathway for transport of fluid and selected membrane components from the recycling circuit to the degradative system. The feeder function is mediated by Late Endosomes. Late Endosomes also function as a system for mediating transport of lysosomal components from the Trans-Golgi Network (TGN) to lysosomes. This allows maintenance, diversification, and expansion of the recycling and degradative systems. Finally, the cytosol must be included among the essential elements, because it provides a spectrum of transiently associated, peripheral membrane components that support, regulate, and define the pathway.

In addition to tissue culture cells, the most valuable system for endocytosis studies has been yeast, which seems to have endosomal compartments comparable to animal cells. More recently, filamentous fungi such as Aspergillus nidulans have proven to be excellent systems to study endosomes and their maturation. Caenorhabditis elegans and Drosophila melanogaster also have an impact given the background of strong genetics and the possibility of in situ studies in a multicellular organism. Endocytosis in plant cells is actually quite active. The most important difference is the apparent lack of an independent Early Endosome compartment. The functions of Early Endosomes are carried out by an organelle that combines Early Endosomes and the Trans-Golgi Network (TGN). Conceptually, the situation in plants and fungi implies that by participating actively in secretory functions, endosomes can be viewed as an extension of the Trans-Golgi Network (TGN).