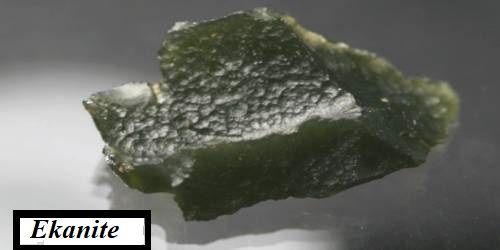 Ekanite is an uncommon silicate mineral with chemical formula: Ca2ThSi8O20 or (Ca, Fe, Pb)2(Th, U)Si8O20. It is an uncommon mineral, one of the very few gemstones that are naturally radioactive. It is a very rare gem, found originally in Sri Lanka, that is an olive green/brown color. It is a member of the steacyite group. It is among the few gemstones that are naturally radioactive. Most ekanite is mined in Sri Lanka, although deposits also occur in Russia and North America.

The type locality is Ehiliyagoda, Ratnapura District, Sabaragamuwa Province, Sri Lanka, where it was first described in 1955 by F. L. D. Ekanayake, and it is named after him. 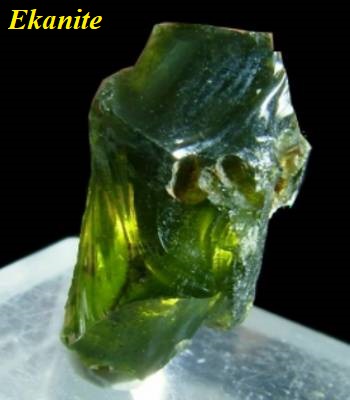 Ekanite occurs in poorly formed prismatic crystals of straw-yellow color when pure, sometimes dark red or brown color, which is caused by inclusions. The material was dark, dull green, but when it was polished as cabochons it revealed a four-rayed star.

In Sri Lanka, the mineral specimens occur as detrital pebbles. In the Tombstone Mountains of Yukon, Canada, the mineral is found in a syenitic glacial erratic boulder. In the Alban Hills of Italy, it is found in the volcanic ejecta.

Ekanite is now amorphous, but inclusions indicate that it was once tetragonal. Clear and well-colored stones are rare as the radioactivity tends to degrade the crystal matrix over time in a process known as metamictization.