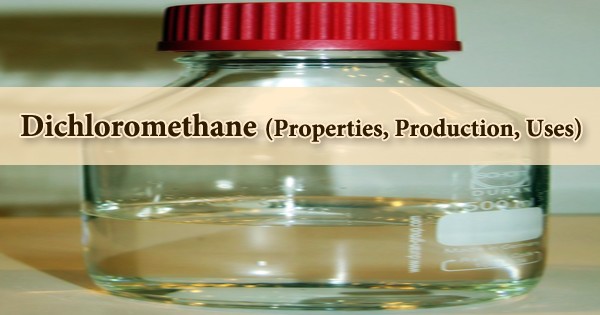 Dichloromethane (DCM, often known as methylene chloride) is a colorless liquid with an ether-like odor; it has the formula CH2Cl2 and is an organochloride chemical. As a solvent, this colorless, volatile liquid with a sweet, chloroform-like odor is commonly employed. It is polar and miscible with numerous organic solvents, despite not being miscible with water. When subjected to high temperatures, noncombustible materials can produce poisonous chloride vapors. In high quantities, vapors are narcotic.

Water and most organic solvents, such as ether, ethanol, ketones, aldehydes, and phenols, are moderately soluble in DCM. Oceanic sources, macroalgae, marshes, and volcanoes are all-natural sources of dichloromethane. However, industrial emissions account for the majority of dichloromethane in the environment. When exposed to the air, DCM vapors are heavier than air and are typically non-explosive, stable, and non-flammable; nevertheless, temperatures beyond 100oC must be avoided.

Although natural sources have a minor role in the global release of DCM, it is possible that the latter will lead to the formation of the former. Dichloromethane belongs to the chloromethane family, which consists of methane with two hydrogens substituted by chlorine. It is commonly used as a solvent, a paint stripper, and to remove caffeine from coffee and tea. It is a dense, non-flammable colorless liquid at room temperature (b.p. 40°C, d = 1.33) that is immiscible with water.

DCM has a significant reaction with active metals including potassium, sodium, and lithium, as well as strong bases like potassium tert-butoxide. Powerful caustics, strong oxidizers, and chemically active metals, such as magnesium and aluminum powders, are incompatible with the compound. DCM is made by heating chloromethane or methane to 400–500 °C and then treating it with chlorine gas. Both methane and chloromethane undergo a series of reactions at these temperatures, creating progressively more chlorinated compounds. In 1993, the United States, Europe, and Japan generated an estimated 400,000 tons in this manner.

Methylene chloride can harm several types of coatings, plastics, and rubber, according to DCM. Dichloromethane reacts with liquid oxygen, sodium-potassium alloy, and nitrogen tetroxide, among other substances. The compound corrodes some stainless steels, nickel, copper, and iron when it comes into contact with water. It functions as a polar aprotic solvent, as well as a carcinogen and a refrigerant. It is a volatile chemical molecule that belongs to the chloromethane family.

Henri Victor Regnault (1810–1878), a French scientist, originally isolated DCM in 1839 from a combination of chloromethane and chlorine that had been exposed to sunshine. When dichloromethane is exposed to heat or water, it undergoes rapid hydrolysis, which is accelerated by light. DCM solutions in acetone or ethanol should be stable for 24 hours under normal conditions. When compared to its congeners, chloroform and carbon tetrachloride, dichloromethane is relatively stable in the absence of moisture at room temperature.

DCM is a valuable solvent for many chemical processes due to its volatility and ability to dissolve a wide spectrum of organic molecules. It’s used in the food sector to decaffeinate coffee and tea, as well as to make hop extracts and other flavorings. Alkali metals, zinc, amines, magnesium, and zinc and aluminum alloys do not react with DCM. The chemical can explode violently when coupled with nitric acid or dinitrogen pentoxide. When methylene chloride is coupled with methanol vapor in the air, it becomes flammable.

Methylene chloride, or DCM, is largely employed in paint removers, but it is also utilized in aerosol formulations, as a solvent in pharmaceutical manufacturing, as a degreasing agent, in electronics manufacturing, and as an ethane foam blowing agent. This chemical irritates the nose and throat and has an effect on the central nervous system when inhaled. Because of its high volatility, it is used as an aerosol spray propellant and a blowing agent for polyurethane foams. Because the compound has the potential to explode, sparks, hot surfaces, open flames, heat, static discharge, and other ignition sources must be avoided.

DCM is a potential mutagen and is suspected of being a human carcinogen. It’s a Lewis acid with the ability to form hydrogen bonds with electron donors. It’s classed as a hard acid, and it’s part of the ECW model. It’s a solvent that’s been employed in a lot of donor-acceptor bonding thermodynamic investigations. In these thermodynamic analyses, the donor hydrogen-bonding corrections of methylene chloride have been published.

DCM can be dissolved when it comes into contact with hot surfaces or an open flame, releasing stinging poisonous fumes that serve as a warning of their presence. It emits highly poisonous phosgene and hydrogen chloride gases when heated to breakdown. It’s also the fluid of Christmas bubble lights, which include a colored bubbling tube above a lamp for heat and a little amount of rock salt for thermal mass and a nucleation site for the phase-changing solvent.

Liquid methylene chloride or DCM attacks some polymers, rubbers, and coatings. It is used in the field of civil engineering to test bituminous materials as a solvent to separate the binder from the aggregate of asphalt or macadam, allowing the materials to be tested. Breathing fumes from paint strippers that contain it (check the label), breathing fumes from aerosol cans that utilize it, and breathing contaminated air near waste sites are all ways to be exposed to dichloromethane in the job.