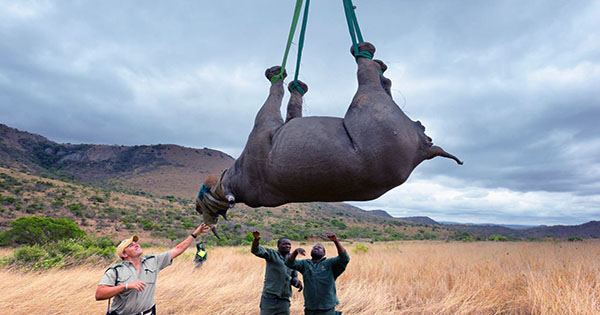 The winners of the 2021 Ig Nobel Prizes were announced Thursday evening and included dangling rhinos, bubblegum biomes, and decongesting orgasms. The Ig Nobel Prizes, unlike their stuffier older sibling, the Nobel Prizes, honor scientific advances that “first make people laugh, then make them think.” The yearly awards, which are run by the magazine Improbable Research, are now in their 31st year – and they’re as ludicrous as ever.

Due to COVID-19, where real Nobel laureates handed out the 10 prizes, this year’s ceremony took place via a fever dream-like livestream, rather than the normal setting of Harvard University. The awards are also evidently popular in Japan, as they were broadcast live on a Japanese webstream. The scientists who discovered that dangling rhinoceroses upside down from a helicopter is the safest way to transport rhinos received the Ig Nobel Transportation Prize.

Moving individuals to new environments to mix up genetic diversity is critical for rhino conservation, so as absurd as it may sound (and as frightening as it may be for someone looking up in the African savannah and seeing a rhino dangling upside down there), this is significant work.

The Nobel Peace Prize was awarded to a group of American scientists who proposed that beards evolved to cushion the blows of punches to the face. It’s no surprise that hipsters favor beards.

The researchers who determined orgasms can be as helpful as decongestant drugs in aiding nasal airflow won this year’s medical prize.

Pavlo Blavatskyy took up the Economics prize for his research into how politicians’ obesity might be a useful predictor of a country’s corruption. A large belly turns out to be a fantastic method to recognize a fat-cat politician. Susanne Schötz won the Biology Prize for a collection of studies on cat vocalizations, ranging from purrs and chirps to tweets and tweedles.

The Ecology Prize went to a study that looked at the different species of bacteria that thrive on wads of abandoned chewing gum adhered to the sidewalk.

The Entomology Prize went to “A New Method of Cockroach Control on Submarines.” Unsurprisingly, spraying the crap out of cabins with insecticide is the key to getting rid of roaches on a submarine.