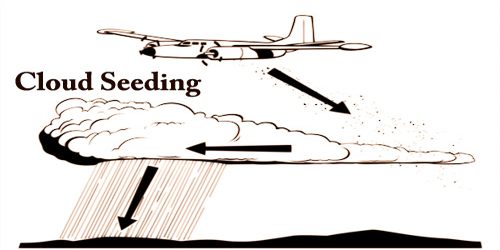 Cloud Seeding or man-made precipitation enhancement is a way to artificially modify the weather by spreading clouds with small particles, to make it snow or rain. In other words, cloud seeding is all about manipulating the clouds so that it rains. Clouds consist of water droplets or ice crystals. It also occurs due to ice nucleators in nature, most of which are bacterial in origin. Cloud seeding involves the addition of aerosol, such as silver iodide aerosol, that modifies the phase and size distribution of hydrometeors. The goal of cloud seeding is to alter the natural development of the cloud to enhance precipitation, suppress hail, dissipate fog, or reduce lightning. Various cloud seeding techniques are employed, as particles are released from rockets, aircraft, or ground. The seeding of ice-phase clouds can induce the phase transition from a supercooled water cloud to one composed of ice. In the case of dynamic cloud seeding, the purpose is to stimulate vertical air motions through increased buoyancy caused by the release of latent heat of freezing. The most common chemicals used for cloud seeding include silver iodide, potassium iodide, and dry ice (solid carbon dioxide). Liquid propane, which expands into a gas, has also been used. This can produce ice crystals at higher temperatures than silver iodide. After promising research, the use of hygroscopic materials, such as table salt, is becoming more popular.

Cloud seeding has been practiced by a number of countries including India, the United Arab Emirates, the United States, China, and the United Kingdom. China has used the technology dependently in dry areas of the country. The UAE has used the technology since the 1990s, including in 2015 when they pumped about $5 million into their Research Program for Rain Enhancement Science. The US has employed the technology since the 1950s, especially in the Rocky Mountains, Sierra Nevada, and other mountainous and dry areas. During the 2008 Beijing Summer Olympics and during the wedding of the Duke and Duchess of Cambridge, the technology was used to prevent rain. Formerly, cloud seeding was rejected in Australia on environmental grounds because of concerns about the protected species, the pygmy possum. Since silver iodide and not elemental silver is the cloud seeding material, the claims of negative environmental impact are disputed by peer-reviewed research as summarized by the International Weather Modification Association.