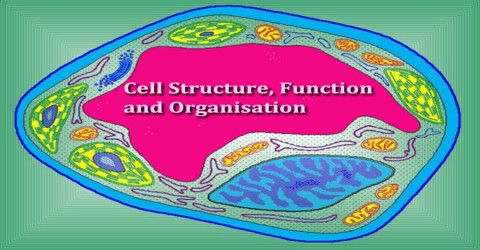 The cell is the structural and functional unit of all living organisms, and is sometimes called the “building block of life.” Some organisms, such as bacteria, are unicellular, consisting of a single cell.

Cell is the basic structural and functional unit of any living thing. Each cell is a small container of chemicals and water wrapped in a membrane. There are 100 trillion cells in a human, and each contains all of the genetic information necessary to manufacture a human being. This information is encoded within the cell nucleus in 6 billion subunits of DNA called base pairs. These base pairs are packaged in 23 pairs of chromosomes, with 1 chromosome in each pair coming from each parent. Each of the 46 human chromosomes contains the DNA for thousands of individual genes. The cell was discovered by Robert Hooke in 1665, who named the biological unit for its resemblance to cells inhabited by Christian monks in a monastery. Cell theory, first developed in 1839 by Matthias Jakob Schleiden and Theodor Schwann, states that all organisms are composed of one or more cells, that cells are the fundamental unit of structure and function in all living organisms, that all cells come from preexisting cells, and that all cells contain the hereditary information necessary for regulating cell functions and for transmitting information to the next generation of cells. Cells emerged on Earth at least 3.5 billion years ago.

There are many cells in an individual, which performs several functions throughout the life. The different types of cell include- prokaryotic cell, plant and animal cell.  The size and the shape of the cell range from millimeter to microns, which are generally based on the type of function that it performs. A cell generally varies in their shapes. A few cells are in spherical, rod, flat, concave, curved, rectangular, oval and etc. These cells can only be seen under microscope. Prokaryotic Cell Structure: They are the first organisms to be present on our planet earth. Organisms, with this cell type are known by the term prokaryotic organisms (or) prokaryotes. Bacteria, blue green algae and E.coli are few examples of this category. Prokaryotic cells are single-celled organisms, with the absence of nucleus and comprises of capsule, cell wall, cell membrane, cytoplasm, nucleiod, ribosome, plasmids, pili and flagella. Eukaryotic Cell Structure: They are the cells with the presence of true nucleus. Organisms, with this cell type are known by the term eukaryotic organisms (or) eukaryotes. Animals, plants and other organisms excluding bacteria, blue green algae and E.coli have been grouped into this category. Eukaryotic cells are more complex than prokaryotic cells. These organisms have membrane bound nucleus with many cell organelles to perform several cellular functions within the system. Animal Cell Structure: Animal cells are eukaryotic cells, with the presence of true nucleus; multicellular large and advanced membrane bound organelles. Like plant cells, animal cells have same organelles except the cell wall, chloroplasts, number of vacuoles and many more. Due to the absence of cell wall the shape of an animal cell is irregular.