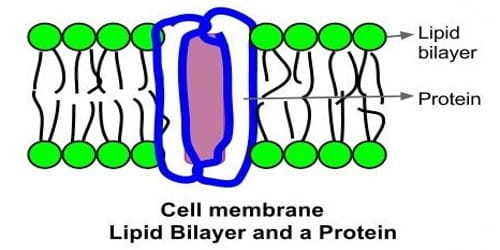 The cell membrane is a thin flexible layer around the cells of all living things. It is a double layer of lipids and proteins that surrounds a cell and separates the cytoplasm from its surrounding environment. It is sometimes called the plasma membrane or cytoplasmic membrane.

All cells are contained by a cell membrane that keeps the pieces inside. Its basic job is to separate the inside of cells from the outside. In all cells, the cell membrane separates the cytoplasm inside the cell from its surroundings. It is selectively permeable, which means that it only lets certain molecules enter and exit. Animal cells are contained in just a membrane. Bacteria, fungi, and plants have strong cell walls as well, which support the cell and block the passage of large molecules.

The membrane is selectively permeable. It is active and regulates (adjusts) what comes in and what goes out of the cell. The movement of substances across the membrane can be either passive, occurring without the input of cellular energy, or active, requiring energy.