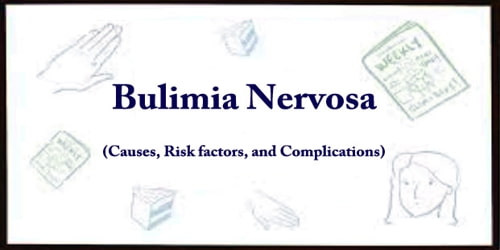 Definition: Bulimia nervosa, also known as simply bulimia, is a psychological and severe life-threatening eating disorder described by the ingestion of an abnormally large amount of food in short time period, followed by an attempt to avoid gaining weight by purging what was consumed. Purging refers to the attempts to get rid of the food consumed. This may be done by vomiting or taking laxatives. Other efforts to lose weight may include the use of diuretics, stimulants, water fasting, or excessive exercise.

Most people with bulimia are at a normal weight. The forcing of vomiting may result in the thickened skin on the knuckles and breakdown of the teeth. Bulimia is frequently associated with other mental disorders such as depression, anxiety, and problems with drugs or alcohol. There is also a higher risk of suicide and self-harm. 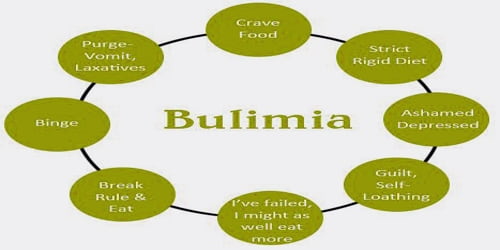 There are two common types of bulimia nervosa, which are as follows:

Bulimia is more common among those who have a close relative with the condition. The percentage risk that is estimated to be due to genetics is between 30% and 80%. Other risk factors for the disease include psychological stress, cultural pressure to attain a certain body type, poor self-esteem, and obesity.

Causes and Risk factors of Bulimia Nervosa: The exact cause of bulimia is unknown. Many factors could play a role in the development of eating disorders, including genetics, biology, emotional health, societal expectations and other issues.

Some of the main causes of bulimia include:

Researchers also believe that this eating disorder may begin with a dissatisfaction of the person’s body and extreme concern with body size and shape. Usually, individuals suffering from bulimia have low self-esteem and fear becoming overweight. The fact that bulimia tends to run in families also suggests that a susceptibility to the disorder might be inherited. 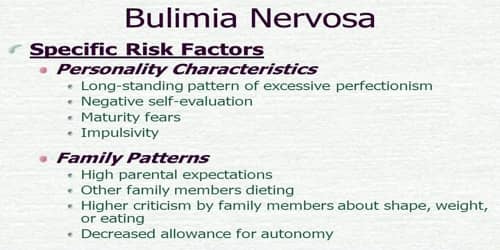 Bulimia nervosa occurs more frequently in developed countries and in cities, with one study finding that bulimia is five times more prevalent in cities than in rural areas. Girls and women are more likely to have bulimia than boys and men are. Bulimia often begins in the late teens or early adulthood.

Factors that increase people risk of bulimia may include:

Bulimia is thought to be more prevalent among Caucasians; however, a more recent study showed that African-American teenage girls were 50 per cent more likely than white girls to exhibit bulimic behaviour, including both binging and purging. 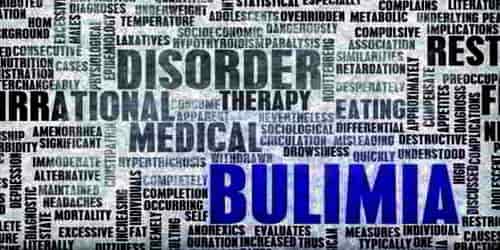 Complications of Bulimia Nervosa: Bulimia is more common among those who have a close relative with the condition. The percentage risk that is estimated to be due to genetics is between 30% and 80%. Bulimia may cause numerous serious and even life-threatening complications. Possible complications include:

One of the more detrimental and common side effects of bulimia involves dental damage. The negative ways in which teeth are impacted by bulimia is often overshadowed by other major health consequences, such as cardiovascular complications, electrolyte imbalances, gastrointestinal distress, and bone loss.