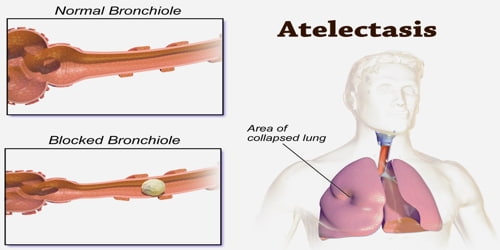 Definition: Atelectasis is a medical term used to describe the complete or partial collapse of a lung. It is sometimes referred to as a “collapsed lung,” although the term can also be applied to a condition called pneumothorax. It occurs when tiny air sacs in the lungs known as alveoli deflate. Bibasilar atelectasis is the collapse of the lowest lobes in both lungs. Bibasilar atelectasis can cause severe complications if left untreated.

It is a very common finding in chest x-rays and other radiological studies and may be caused by normal exhalation or by various medical conditions. Although frequently described as a collapse of lung tissue, atelectasis is not synonymous with a pneumothorax, which is a more specific condition that features atelectasis.

Atelectasis may be acute, occurring suddenly over the matter of minutes, or chronic, developing over a period of days to weeks. There are four main causes of atelectasis, which in turn may be caused by a number of different medical conditions, ranging from lung cancer to an enlarged heart. 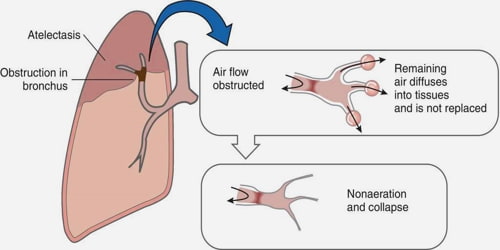 Causes, Sign, and Symptom of Atelectasis: Many things can cause atelectasis. Depending on the cause, atelectasis is categorized as either obstructive or nonobstructive.

The most common cause is post-surgical atelectasis, characterized by splinting, i.e. restricted breathing after abdominal surgery.

The use of anesthesia during surgery may cause bibasilar atelectasis. Anesthesia changes a person’s regular breathing pattern. The normal gas exchange in their body may also be affected. This combination could lead to alveoli collapsing.

Another common cause is pulmonary tuberculosis. Smokers and the elderly are also at an increased risk. Another cause is poor surfactant spreading during inspiration, causing the surface tension to be at its highest which tends to collapse smaller alveoli. Atelectasis may also occur during suction, as along with sputum, air is withdrawn from the lungs.

When a person suffers a chest injury from a traumatic event, such as a car crash, it could make their breathing difficult and compress their lungs. Air that leaks into the pleural space can put pressure on the lungs, making it hard for them to inflate. This pressure can lead to a collapse of one or more lobes.

A tumor that is not near the airway may put pressure on the lung as it grows. This pressure may collapse the lobe or the entire lung.

Risk factors associated with increased likelihood of the development of atelectasis include: type of surgery (thoracic, cardiopulmonary surgeries), use of muscle relaxation, obesity, high oxygen, the lower lung segments.

Atelectasis often has few symptoms if it develops slowly or involves only a small portion of the lung. Atelectasis typically occurs unilaterally, meaning in either one lung or the other.

As the condition progresses, the symptoms can become more profound as oxygen saturation levels in the blood begin to decrease. This can lead to a sudden, severe drop in blood pressure, rapid heart rate (tachycardia), and shock. 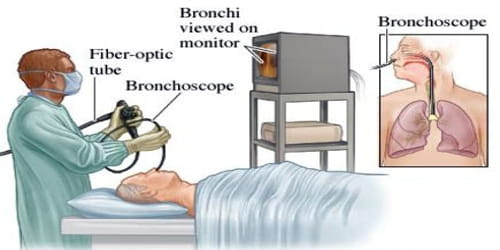 Diagnosis and Treatment of Atelectasis: Atelectasis is often confused with pneumothorax, so a thorough diagnosis is necessary. Doctors may do a physical exam and may also want to monitor a person’s oxygen levels or lung function periodically to note any changes. The doctor tries to get a better idea of how well the patient’s lungs are working. To do this, they might:

Treatment of atelectasis depends on the underlying cause, with the aim of re-expanding the lung to its normal size. The approaches can vary. If a tumor is the cause of the collapse, surgery may be involved.

Most cases of atelectasis don’t require surgery. Depending on the underlying cause, the doctor might suggest one or a combination of these treatments:

In very rare cases, patient’s may need to have a small area or lobe of their lung removed. This is usually only done after trying all other options or in cases involving permanently scarred lungs. 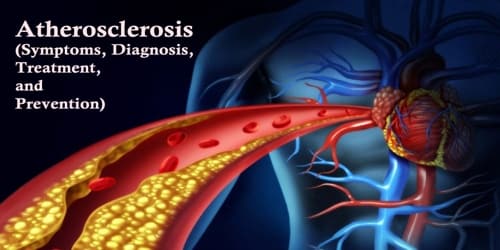 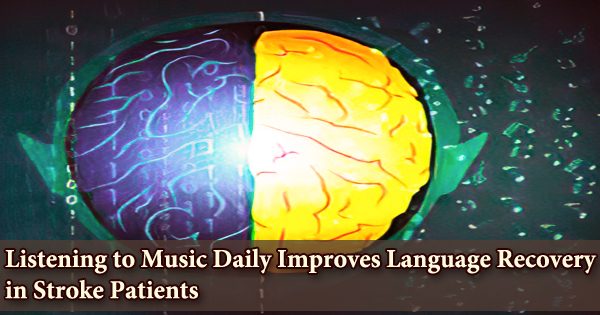 Symptoms and Treatment for Deviated Septum