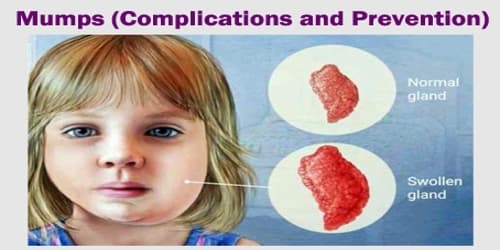 Definition: Mumps is a viral infection that primarily affects saliva-producing (salivary) glands that are located near our ears and it is caused by the mumps virus. The most obvious symptom is swelling of the salivary glands, giving the patient a “hamster-like” face. Initial signs and symptoms often include fever, muscle pain, headache, poor appetite, and feeling tired.

The affected salivary glands are called the parotid glands; sometimes, the mumps virus can also cause inflammation of the testis, ovary, pancreas, or meninges (membranes that surround the brain and spinal cord). Once someone has had mumps, they usually become immune to future infections.

Symptoms typically occur 16 to 18 days after exposure and resolve after seven to ten days. Symptoms in adults are often more severe than in children. About a third of people have mild or no symptoms.

To reduce the spread of mumps, the MMR (measles, mumps, and rubella) vaccine is often given at an early age to build immunity to the virus. Since the MMR vaccination was brought in, there has been a 99 percent decrease in mumps cases in the United States.

Here are some key points about mumps –

Mumps is more common in the developing world where vaccination is less common. Outbreaks, however, may still occur in a vaccinated population. Before the introduction of a vaccine, mumps was a common childhood disease worldwide. 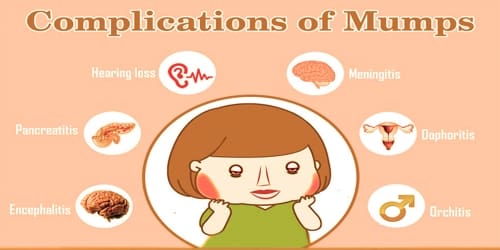 Complications of Mumps: Complications from mumps are rare, but can be serious if left untreated. Mumps mostly affects the parotid glands. However, it can also cause inflammation in other areas of the body, including the brain and reproductive organs.

Most mumps complications involve inflammation and swelling in some part of the body, such as:

Rarer complications of mumps include:

As rare as some of these complications are, it is important to seek medical advice or help if an individual suspect they or their child may be developing them. 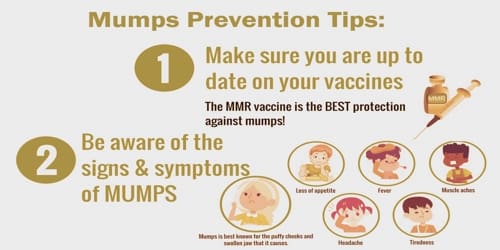 Prevention of Mumps: The best way to prevent mumps is to be vaccinated against the disease. Most people have immunity to mumps once they’re fully vaccinated. The WHO (World Health Organization) recommends the use of mumps vaccines in all countries with well-functioning childhood vaccination programmes.

The mumps vaccine is usually given as a combined measles-mumps-rubella (MMR) inoculation, which contains the safest and most effective form of each vaccine. Two doses of the MMR vaccine are recommended before a child enters school. Those vaccines should be given when the child is:

Some anti-vaccine activists protest against the administration of a vaccine against mumps, claiming that the attenuated vaccine strain is harmful, and/or that the wild disease is beneficial. 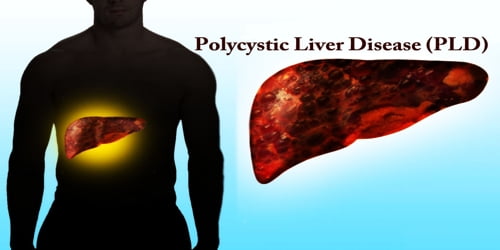