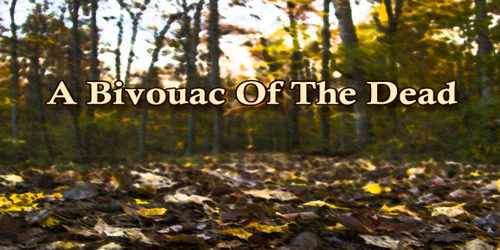 A Bivouac Of The Dead

Away up in the heart of the Allegheny Mountains, in Pocahontas County, West Virginia, is a beautiful little valley through which flows the east fork of the Greenbrier River. At a point where the valley road intersects the old Staunton and Parkersburg turnpike, a famous thoroughfare in its day is a post office in a farmhouse.

The name of the place is Travelers Repose, for it was once a tavern. Crowning some low hills within a stone’s throw of the house are long lines of old Confederate fortifications, skillfully designed and so “well preserved” that an hour’s work by a brigade would put them into serviceable shape for the next civil war. This place had its battle what was called a battle in the “green and salad days” of the great rebellion.

A brigade of Federal troops, the writer’s regiment among them, came over Cheat Mountain, fifteen miles to the westward, and, stringing its lines across the little valley, felt the enemy all day; and the enemy did a little feeling, too. There was a great cannonading, which killed about a dozen on each side; then, finding the place too strong for assault, the Federals called the affair a reconnaissance in force and burying their dead withdrew to the more comfortable place whence they had come. Those dead now lie in a beautiful national cemetery at Grafton, duly registered, so far as identified, and companioned by other Federal dead gathered from the several camps and battlefields of West Virginia. The fallen soldier (the word “hero” appears to be a later invention) has such humble honors as it is possible to give.

“His part in all the pomp that fills

The circuit of the summer hills

Is that his grave is green.”

True, more than a half of the green graves in the Grafton cemetery are marked “Unknown,” and sometimes it occurs that one thinks of the contradiction involved in “honoring the memory” of him of whom no memory remains to honor; but the attempt seems to do no great harm to the living, even to the logical.

A few hundred yards to the rear of the old Confederate earthworks is a wooded hill. Years ago it was not wooded. Here, among the trees and in the undergrowth, are rows of shallow depressions, discoverable by removing the accumulated forest leaves. From some of them may be taken (and reverently replaced) small thin slabs of the split stone of the country, with rude and reticent inscriptions by comrades. I found only one with a date, only one with full names of man and regiment. The entire number found was eight.

In these forgotten graves rest the Confederate dead between eighty and one hundred, as nearly as can be made out. Some fell in the “battle;” the majority died of the disease. Two, only two, have apparently been disinterred for reburial at their homes. So neglected and obscure is this campo Santo that only he upon whose farm it is the aged postmaster of Travelers’ Repose appears to know about it. Men living within a mile have never heard of it. Yet other men must be still living who assisted to lay these Southern soldiers where they are and could identify some of the graves.

Is there a man, North or South, who would begrudge the expense of giving to these fallen brothers the tribute of green graves? One would rather not think so. True, there are several hundreds of such places still discoverable in the track of the Great War. All the stronger is the dumb demand the silent plea of these fallen brothers to what is “likest God within the soul.”

They were honest and courageous foemen, having little in common with the political madmen who persuaded them to their doom and the literary bearers of false witness in the after time. They did not live through the period of honorable strife into the period of vilification did not pass from the Iron Age to the brazen from the era of the sword to that of the tongue and pen. Among them is no member of the Southern Historical Society. Their valor was not the fury of the non-combatant; they have no voice in the thunder of the civilians and the shouting. Not by them are impaired the dignity and infinite pathos of the Lost Cause. Give them, these blameless gentlemen, their rightful part in all the pomp that fills the circuit of the summer hills.