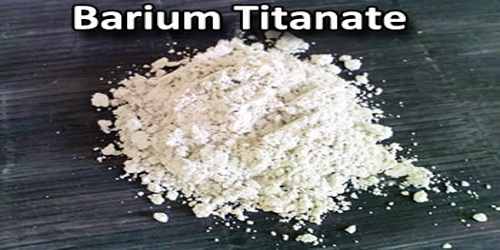 Barium titanate (BaTiO3) is an inorganic chemical compound which is available in a white powder form. It is a common ferroelectric material which adopts the perovskite structure type ABO3. It is widely utilized to manufacture a variety of electronic components. It is used in capacitors, electromechanical transducers and nonlinear optics. 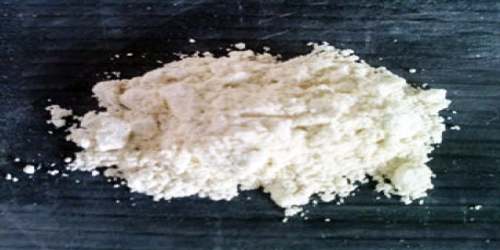 Barium titanate is a versatile elctroceramics that finds widespread application. At room temperature, BaTiO3 adopts a tetragonal perovskite type structure and is a ferroelectric with high permittivity. It transforms to the cubic, paraelectric state at the Curie temperature, TC, of approximates to 130 ◦C. Undoped BaTiO3 is electrically insulating, but oxygen deficiency can occur at high temperatures (T > 350◦C, in air) and/or in reducing atmospheres.

Barium titnate is soluble in many acids including sulfuric, hydrochloric and hydrofluoric acids. It is insoluble in alkalis and water.

In the pure form it is an electrical insulator. However, when doped with small amounts of metals, most notably scandium, yttrium, neodymium, samarium etc it becomes semiconducting. The high temperature cubic phase is easiest to describe, consisting of octahedral TiO6 centres that define a cube with Ti vertices and Ti-O-Ti edges. In the cubic phase, Ba2+ is located at the center of the cube, with a nominal coordination number of 12. Lower symmetry phases are stabilized at lower temperatures, associated with the movement of the Ba2+ to off-center position. The remarkable properties of this material arise from the cooperative behavior of the Ba2+ centres. 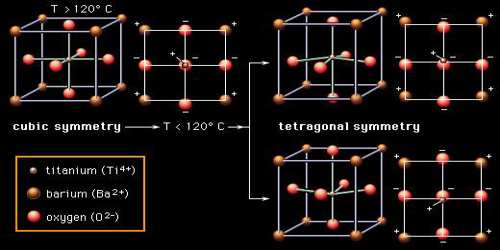 Barium titanate can be synthesized by the relatively simple sol–hydrothermal method. It can also be manufactured by heating barium carbonate and titanium dioxide. The reaction proceeds via liquid phase sintering. Single crystals can be grown around 1100 °C from molten potassium fluoride. Other materials are often added for doping, e.g. to give solid solutions with strontium titanate. It can exist in five different phases, from low temperature to high temperature: rhombohedral, orthorhombic, tetragonal, cubic and hexagonal.

Like many oxides, barium titanate is insoluble in water but attacked by sulfuric acid. Its bulk room-temperature bandgap is 3.2 eV, but it increases to ~3.5 eV when the particle size is reduced from about 15 to 7 nm.

Barium titanate is a dielectric ceramic used for capacitors. It can be used as an electrical insulator in its purest form. It is also be used as a piezoelectric material in microphones and other transducers. It can be doped with certain amounts of other metals like yttrium, scandium and samarium to make it a semiconducting material. As a semiconductor, Barium titanate shows PTCR properties in polycrystalline form. Polycrystalline barium titanate displays positive temperature coefficient, making it a useful material for thermistors and self-regulating electric heating systems. 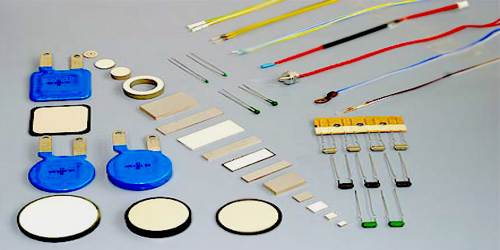