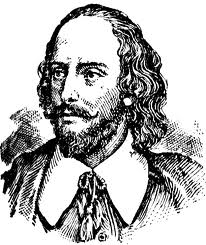 The Tempest (1611), tragicomedy and romantic drama by William Shakespeare, probably the last plays attributable to his sole authorship.

Anthonio along with Alonso, the king of Naples planned to overthrow Prospero from Milan. One night Prospero along with her three-year-old daughter, Miranda were taken to the seashore and put in a boat with neither sails nor oars to drift in the stormy sea. They were not allowed taking anything with them. But one of Alonso’s noblemen, Gonzalo secretly put some food, water, clothes and books that Prospero placed above his Dukedom in the boat.

But nothing really happened to them and landed on a lonely and deserted island. There he freed Ariel, an airy spirit and then made him his slave and told him he will be freed after her job is done.

Prospero lived in this way in the island for twelve years. One day Prospero ordered Ariel to cause a violent and ferocious storm at sea and wreck the ship at the sea but without hurting anyone. The ship was returning from Tunis to Naples, which carried Anthonio, Alonso, Sebastian, brother of Alonso, Ferdinand the son of Alonso and other crews. The ship was wrecked and Ferdinand was separated from the others.

Suddenly Ferdinand heard strange music that was deliberately done by Ariel. This music attracted him towards Prospero’s cell where he met Miranda. When he first saw her he thought that she was a goddess, the goddess of the island. When Miranda also first saw him she also thought that Ferdinand was a god. But Prospero said that he is a normal human, not a god. Miranda and Ferdinand fell in love in their first sight. In fact, Miranda totally surrendered herself to Ferdinand. But Prospero wanted to know and test if Ferdinand was good enough for Miranda and so that they had a stable relationship in the future. Prospero forced him to work because of his magical powers. Ferdinand continued working because he loved Miranda. After all this Prospero finds that Ferdinand is the husband Miranda could get.

On the other side, Ariel dressed as a Harpy with her fellow ministers tell the “three men of sin” that why they had been through such a lot of trouble and told them to apologize to Prospero. Alonso Apologized to Prospero and appreciates Miranda as his daughter-in-law. Alonso felt repentant whereas, the other two sinners stay largely unchanged.

The two main plot of the play can be Prospero’s forgiveness of his enemies even though he could have imposed severe and lasting punishment upon them all and the other plot can be the case of love between Ferdinand and Miranda.

“The Tempest” is a terrific and stunning play by William Shakespeare that is completely different from the realities in our life. However, the realism is not completely absent in the play. There is enough realism in the characters and their minds. The plot of “The Tempest” is alone among Shakespeare’s plays in observing the harmony of time. The play contains something for all tastes: exciting action; lovely songs; a stately masque with music and dancing; the farcical comedy of the monster Caliban, the love story between Ferdinand and Miranda; and, controlling and managing everything, the figure of the judicious and benevolent magician Prospero.

The main plots of the play can be regarded as Prospero’s forgiveness of his enemies and the immense love between Ferdinand and Miranda.

In this play, Shakespeare has described each of the characters very distinctly and there is a splendid, demanding and a complex plot. It is a richly textured play by a fabulous writer, William Shakespeare.