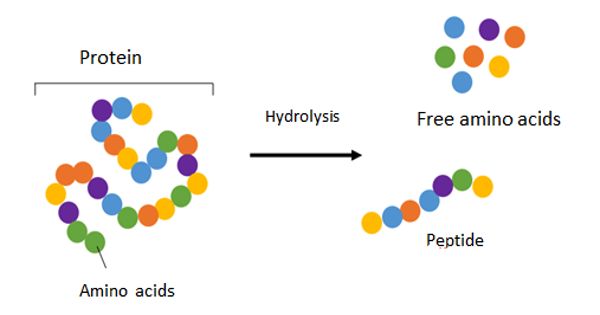 Amino acids are organic compounds that combine to form proteins. These are the building blocks of proteins. It is an organic molecule that is made up of a basic amino group (−NH2), an acidic carboxyl group (−COOH), and an organic R group that is unique to each amino acid. In eukaryotes, there are 20 standard amino acids out of which almost all proteins are made. They are referred to as the building blocks of proteins, are compounds that play many critical roles in your body. They’re needed for vital processes like the building of proteins and the synthesis of hormones and neurotransmitters.

Amino acids and proteins are the building blocks of life. In biochemistry, an amino acid is any molecule that has both amine (NH2+R) and carboxyl (C=O) functional groups. In biochemistry, this term refers to alpha-amino acids with the general formula H2NCHRCOOH, where R is one of many side groups. Amino acid deficiency can result in decreased immunity, digestive problems, depression, fertility issues, lower mental alertness, slowed growth in children, and many other health issues.

Amino acids are organic compounds composed of nitrogen, carbon, hydrogen, and oxygen, along with a variable side chain group. About 500 amino acids are known. For animals, the most important thing that amino acids do is to make proteins, which are very long chains of amino acids. Your body needs 20 different amino acids to grow and function properly. Though all 20 of these are important for your health, only nine amino acids are classified as essential. These are histidine, isoleucine, leucine, lysine, methionine, phenylalanine, threonine, tryptophan, and valine.

Every protein has its own sequence of amino acids, and that sequence makes the protein take different shapes, and have different functions. Though amino acids are most recognized for their role in muscle development and repair, the body depends on them for so much more. Amino acids are like the alphabet for proteins; even though you only have a few letters, if you connect them, you can make many different sentences. When a person eats a food that contains protein, their digestive system breaks the protein down into amino acids. The body then combines the amino acids in various ways to carry out bodily functions.

Nine of the 20 standard amino acids are “essential” amino acids for humans. Amino acids build muscles, cause chemical reactions in the body, transport nutrients, prevent illness, and carry out other functions. They cannot be built (synthesized) from other compounds by the human body, and so must be taken in as food. Others may be essential for some ages or medical conditions. That’s why essential amino acid deficiencies can negatively impact your entire body including your nervous, reproductive, immune, and digestive systems. Essential amino acids may also differ between species.