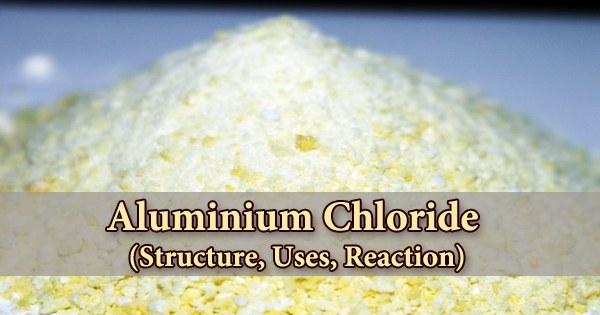 Aluminium chloride, also known as aluminium trichloride, is a chemical compound with the chemical formula AlCl3. When iron chloride is present, it takes on a yellow tint when compared to the white pure component. Compounds with the formula AlCl3(H2O)n (n = 0 or 6) are described. AlCl3 is a white or light-yellow crystalline solid (or amorphous solid, depending on the technique of manufacture); hygroscopic; melts at 190°C at 2.5 atm; sublimes at 181.2°C; density 2.44 g/cm3 at 25°C; decomposes in water, emitting heat; soluble in HCl.

Many organic solvents, including pure ethanol, chloroform, carbon tetrachloride, and ether, are soluble in it; benzene is marginally soluble. It is made up of aluminum and chlorine atoms in a 1:3 ratio, with one form containing six hydration fluids. Anhydrous aluminium trichloride is the most often used Lewis acid, and AlCl3 is employed as a Lewis base in a variety of chemical applications. It’s also available as an antiperspirant and an antihemorrhagic agent in over-the-counter and prescription formulations.

Commercially, the anhydrous substance is valuable because it has a low melting and boiling point. In a number of Friedel-Crafts processes, anhydrous Aluminum chloride is utilized as the catalyst. This method produces large volumes of ethylbenzene, which is then used to manufacture styrene.

The FDA has approved the use of aluminum chloride as an active component in antiperspirant products up to 15%, calculated in hexahydrate form, in an aqueous solution nonaerosol dosage form. Solid AlCl3 is layered cubic tight packed layers in a sheet-like structure. It’s manufactured by chlorinating molten aluminum at temperatures ranging from 650 to 750°C;

The coordination geometry of the Al centers is octahedral. Yttrium(III) chloride, as well as a variety of other compounds, have the same structure. When melted, aluminium trichloride exists as the dimer Al2Cl6, which contains tetracoordinate aluminium. It can be made by chlorinating bauxite at high temperatures in the presence of a chlorinated organic reductant like CCl4. Some aluminum compounds are used therapeutically, for example, aluminum hydroxide is one of the ingredients in antacids used to treat stomach ulcers and gastritis.

The Al2Cl6 dimers dissolve at higher temperatures into trigonal planar AlCl3, which is structurally similar to BF3. At 900°C, a pelletized mixture of clay, lignite, and a trace of NaCl is chlorinated, yielding gaseous AlCl3 (Toth process). Alternatively, alumina is mixed with around 20% carbon by weight and a little amount of sodium salt, then chlorinated at 600°C. The monomeric form of aluminum chloride belongs to the D3h point group, while the dimeric form belongs to the D2h point group. The solution of aluminum acetotartrate is used to treat sores and other dermatological issues. The solution inhibits bacteria and has astringent properties.

Anhydrous AlCl3 can be made in the lab by heating the metal with dry HCl gas at 150°C. The product rises to the surface and settles in the cool air condenser. The HCl that hasn’t been reacted is blown out. Even weak Lewis bases like benzophenone and mesitylene can create Lewis acid-base adducts with anhydrous aluminium chloride. It forms tetrachloroaluminate (AlCl4−) in the presence of chloride ions.

Aluminum chloride is a whitish-gray, yellow, or green powder or liquid that is noncombustible yet highly reactive. The vapor is made up of double molecules Al2Cl6 and has a strong, acidic, unpleasant odor similar to hydrochloric acid. Aluminum chloride can be made by combining copper chloride with aluminum metal in a single displacement reaction.

Aluminum chloride has a wide range of economic uses. It’s principally utilized in the electrolytic manufacture of aluminum. Its catalytic use in numerous organic reactions, such as Friedel-Crafts alkylation, polymerization, isomerization, hydrocracking, oxidation, decarboxylation, and dehydrogenation, are another prominent application. Aluminium oxides are dissolved with hydrochloric acid to make hydrated aluminium trichloride. Metallic aluminum dissolves quickly in hydrochloric acid, releasing hydrogen gas and producing a lot of heat.

Aluminum chloride hexahydrate is widely used in deodorants, and a solution of aluminum sulfate has been explored but failed to effectively combat fire ant stings. Because anhydrous AlCl3 reacts violently with bases, special measures must be taken. If inhaled or come into contact with it, it can irritate the eyes, skin, and respiratory system. Because aluminum chloride isn’t flammable but reacts severely with water, fires involving it should be put out with carbon dioxide or dry chemicals.

The Gattermann-Koch reaction, which involves carbon monoxide, hydrogen chloride, and a copper(I) chloride co-catalyst, can also be used to insert aldehyde groups onto aromatic rings with aluminum chloride. Aluminum chloride is used as an ethylbenzene catalyst, dyestuff intermediate, and detergent alkylate, as well as in the manufacture of other chemicals and dyes, astringents, and deodorants, as well as in the petroleum refining and rubber industries. Aluminum chloride has been shown to have good antiperspirant action in pilocarpine-induced sweating in rat foot pads, which is consistent with human tests.