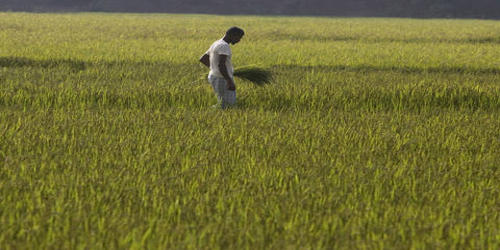 Bangladesh is an agricultural country. About eighty percent of her population depends on agriculture. Agriculture is the single largest producing sector of the economy since it comprises about 18.6% (data released in November 2010) of the country’s GDP and employs around 45% of the total labor force. Bangladesh is not sufficiently developed in the industrial sector. So we have to depend mostly on agricultural products for our living. The major challenge for the country is to sustain the current level of agricultural production. he performance of this sector has an overwhelming impact on major macroeconomic objectives like employment generation, poverty alleviation, human resources development, and food security.

Bangladesh is not advanced in the system of agriculture. The methods of cultivation of the country are mostly old and outdated. A plurality of Bangladeshis earns their living from agriculture.  Scientific methods of cultivation are not followed in our country. Our farmers do not know the proper use of manure and fertilizer for the fertility of the soil. They are also helpless victims of natural calamities like floods and drought. Many industries in our country depend on agricultural products. Both men and animals depend on agriculture for foodstuff. So the failure of crops in any year brings untold suffering to the entire population of the country.

The first thing necessary for the improvement of our agriculture is to educate our peasants. Although rice and jute are the primary crops, wheat is assuming greater importance. Our farmers should be taught the uses of modern instruments for the cultivation of their land. They should know how to irrigate and manure their soil. But the scientific power pumps, machines, tractors cannot be used in small plots of lands. So co-operative farming should be encouraged. The newly emerging contract farming taken up by a number of private agri-business firms is one approach for promoting food production, especially fruits and vegetables. One possibility for the loss of land is to go for land reclamation in the Bay of Bengal.

Due to a number of factors, Bangladesh’s labor-intensive agriculture has achieved steady increases in food grain production despite the often unfavorable weather conditions. Every year natural calamities like floods, cyclones, tidal waves cause great damage to our crops. To prevent it both the government and the public should come forward. These include better flood control and irrigation, generally more efficient use of fertilizers and the establishment of better distribution and rural credit networks. By proper embankment, we can save our crops from the flood. The plant protection department should actively come forward to prevent diseases and insects to save our plants. Agriculture in Bangladesh is heavily dependent on the weather, and the entire harvest can be wiped out in a matter of hours when cyclones hit the country.

Nowadays, pesticides are being used by farmers to protect their crops. Dams have been built in some areas of the country. People are now familiar with chemical fertilizer and manure. Now all-out efforts are being made for the development of agriculture in our country. So it can be expected that in the near future our country will be self-sufficient in agricultural products.