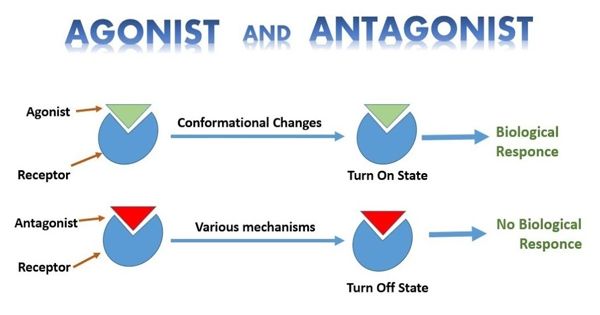 Agonist – a type of chemical

An agonist is a type of chemical known as a ligand. It binds to a receptor. It is a compound that can bind to and cause activation of a receptor, thus mimicking an endogenous ligand or neurotransmitter. It activates (switches on) the receptor to produce a response. In Pharmacology, it is a chemical substance capable of activating a receptor to induce a full or partial pharmacological response.

This is typical of the systems which regulate the body. Being able to control activity is the basis of homeostasis. It is a chemical substance capable of combining with a specific receptor on a cell and initiating the same reaction or activity typically produced by the binding endogenous substance.

A substance which causes the same bodily responses, but does not bind to the same receptor is called a physiological agonist. The active receptor state initiates signaling because of its structural complementariness with coupling proteins that activate signaling pathways, such as G proteins and G protein-coupled receptor kinases.

Agonist is the opposite of antagonist. Antagonists and agonists are key players in the chemistry of the human body and in pharmacology. These are drugs or naturally occurring substances that activate physiologic receptors, whereas antagonists are drugs that block those receptors.