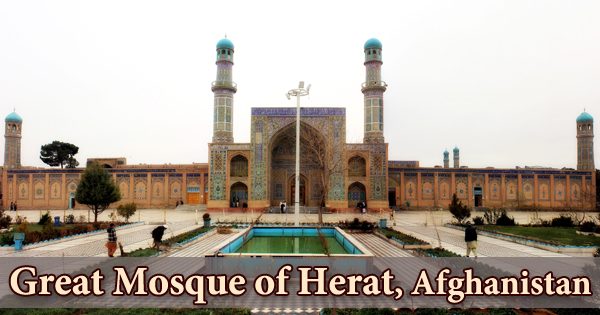 A Visit To A Historical Place/Building (Great Mosque of Herat, Afghanistan)

The Great Mosque of Herat (Persian: مسجد جامع هرات‎, Masjid-i Jāmi‘-i Herāt), also known as the “Jami Masjid of Herat,” is a large mosque in the city of Herat, in the Islamic Republic of Afghanistan’s northwestern region. It was constructed by the Ghurids in 1200 CE, under the rule of Sultan Ghiyath al-Din Muhammad Ghori, and later expanded by many rulers as Herat changed rulers over the centuries, from the Timurids to the Safavids, Mughals, and finally, the Uzbeks, all of whom sponsored the mosque. The Friday Mosque in Herat was given its current form during the last years of the fifteenth century, despite the fact that many of the glazed tiles were replaced during subsequent times. Herat has had a tumultuous history; located at a crossroads of regional trade and surrounded by rich irrigated agriculture, the city has been a prize for successive invaders. During Timur’s rule, the city became a center for Islamic culture and learning, with many monumental buildings built by his successors, but it fell into decline under the Mughals. Herat was not absorbed into the developing Afghan state until 1863 when it was considered part of Persia during the Safavid period in the eighteenth century. Most Islamic groups have a larger mosque, a congregational mosque, for Friday services with a sermon, in addition to several small neighborhood mosques for regular prayer. The Jama Masjid was not always Herat’s largest mosque; the Mosque and Madressa of Gawhar Shad, also founded by the Timurids, was situated in the city’s northern outskirts. Those architectural landmarks, however, were dynamited by British Indian Army officers in 1885 to prevent it from being used as a fortress if a Russian army attempted to conquer India. The famous Sultan Ghayas-ud-Din Ghori laid the foundation for this interesting structure in 1200, but as time passed and rulers changed, the mosque was enlarged and the structure was revised to cope with the change in design, and other facilities were added. The mosque was officially completed in 1446, with the Safavids, Mughals, and Uzbeks all leaving their imprints on the structure. This is supported by an inscription discovered in 1964 during reconstruction on the eastern Ghurid portal, as well as the sixteenth-century Timurid historian Khwandamir’s Khulasat al-Akhbar.

There are 8 minarets, and it is thought by some to be the first mosque in Herat where Friday congregation was held, due to its traditional Islamic architecture, which is recognizable throughout Central Asia. The emir called in staff from all over the empire to complete the decorations, which took more than five years to complete. When Prince Khurram (Shah Jahan) was battling for dominance of the area against the Uzbek tribes, the mosque was given a final renovation during the Mughal Empire. The rectangular style with a wide verandah in the center is packed with unique ornamentation that has been replaced over the years; however, the luxurious tiling that now covers the mosque is the product of the mosque’s tile factory, which has been undergoing restoration since the 1940s. While many of the mosaics are based on Timurid originals, the workshop has added its own designs, colors, and calligraphy to the mix. As a result of this traditional-meets-modern approach, one of the gems of contemporary Islamic abstract expressionism has emerged. The Great Mosque has three walls and a wide central courtyard and is designed in the typical rectangular iwan pattern. In the middle portion, some of the original decoration has been preserved, but most has been replaced. As one of the country’s most unique buildings, the ongoing renovation is attempting to restore it to its former glory, grandiose and luxurious, gorgeous and very impressive, not only to worshipers but also to other tourists.