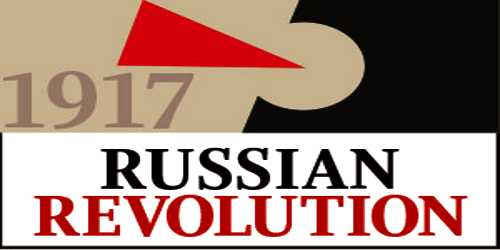 Russian Revolution of 1917, also called the Soviet Revolution, was a rebellion of the Russian people against the rule of the Russian czar (emperor), Nicholas II. The revolution swept away the ancient Russian monarchy and ultimately laid the foundation of the Soviet Union, by which Russia and its neighboring republics in Eastern Europe and northern Asia were governed for 70 years.

In March 1917 (February in the old Russian calendar, which was changed in 1918), the Russian people rebelled against Czar Nicholas II. This demonstration became known as the “February Revolution.” That month, the czar gave up his throne, and the provisional government of Alexander Kerensky was established. The “October Revolution” took place in November 1917, when V. I. Lenin and the Bolsheviks (later called Communists) seized power. The events of 1917 are often referred to as the “Russian Revolution,” but the revolution unfolded over many years. 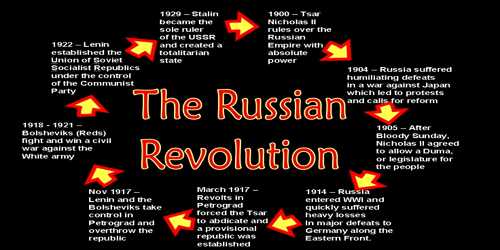 Background to the revolution

Russia experienced profound changes in the late 1800’s and early 1900’s. In the countryside, following a series of poor harvests, farm laborers and peasants and their families were starving. In the towns and cities, industrialization was altering the face of Russian society. The new middle class and the workers were demanding to participate in the running of the country.

This was the atmosphere in which Nicholas II, the last czar of Russia, began his reign in 1894. Discontented Russians formed political organizations, three of which became important: the liberal constitutionalists, who wanted a Western form of parliamentary government to replace the rule of the czars; the social revolutionaries, who sought to start a revolution among the Russian peasants; and the Marxists, who wanted a revolution among the city and town workers. The Marxists followed the teachings and ideas of the German social philosopher Karl Marx.

In 1898, the Marxists formed the Russian Social Democratic Labor Party. In 1903, it split into two groups: the Bolsheviks (“the majority”) and the Mensheviks (“the minority”). The Bolsheviks were led by Vladimir Ilyich Ulyanov, better known to history as V. I. Lenin. See Lenin, V. I.. They wanted party membership restricted to a small group of professional revolutionaries who would lead the proletariat (working people). The Mensheviks sought a wider membership and a more democratic leadership. The majority of party members actually followed the Mensheviks. Lenin misnamed the two factions in an attempt to gain supporters. 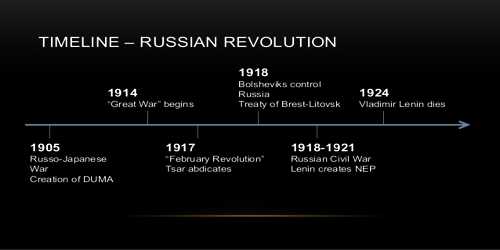 On Jan. 22, 1905, thousands of men, women, and children led by a Russian Orthodox priest, Father Gapon, peacefully marched to Czar Nicholas II’s Winter Palace in St. Petersburg. Their intention was to deliver a petition asking for basic reforms and a democratically elected assembly. The czar’s soldiers fired on the demonstrators, killing or wounding hundreds of them. This “Bloody Sunday” fueled the uprising, which was led mainly by the liberal constitutionalists.

The Duma system did not work in the way the liberals had hoped. Nicholas and his officials were unwilling to give up power, and the czar dissolved the first two Dumas (1906 and 1907) after only a few months. For the third Duma (1907-1912), Nicholas changed the election law so that fewer workers and peasants could vote, resulting in a Duma elected largely by the middle and upper classes. Nevertheless, in many ways, this period was an important one in Russian history. Under Petr Stolypin, the prime minister, Russia prospered. These were years of good harvests and balanced budgets. It demonstrated beyond all doubt that Russians could be governed by means other than those of the police state. This prosperous period ended when Russia became involved in World War I (1914-1918).

The war highlighted the weakness and incompetence of czarist rule. The Germans easily overwhelmed a Russian army that was poorly trained and badly led. The war put the Russian economy under intolerable strain. It could not serve the needs of the army as well as those of civilians. Trains were used to transport military supplies rather than people or food. Shortages of food and fuel resulted, increasing the level of social discontent. In the army, untrained soldiers became rebellious, believing that they would eventually be sent to the front lines and probably be killed.

Meanwhile, Czar Nicholas and his wife were deeply influenced by the monk Grigori Rasputin.  They believed that he was a holy man and could cure their son, who was suffering from hemophilia (a blood disease). Through Rasputin’s influence, Nicholas replaced competent officials in key posts with men who were both incompetent and unpopular.

The February and October Revolutions

In December 1916, a group of Russian nobles murdered Rasputin. On March 8, 1917 (February 25, in the old Russian calendar), strikes and riots over food and coal shortages broke out in the capital, Petrograd, as St. Petersburg was then known. This uprising became known as the February Revolution. Troops sent to quell the riots instead joined in with the rioters. The Duma set up a provisional (temporary) government headed by Prince Georgi Lvov, an aristocrat, social reformer, and statesman. On March 15, it forced Czar Nicholas to abdicate (resign his throne). Nicholas and his family were later taken into custody. The Bolsheviks killed them at Yekaterinburg in 1918.

In March 1917, the Bolsheviks revived the soviet that had been first set up in 1905. The new soviet, called the Soviet of Workers’, Peasants’, and Soldiers’ Deputies, opposed the provisional government, especially after Lenin reappeared in Petrograd in April 1917. The soviet claimed to represent the army and farm laborers as well as the town and city workers. Other soviets were set up throughout Russia. The soviets seriously restricted the government’s ability to carry on the war with Germany, as many Russian army units refused to go on fighting. In July, armed Bolsheviks tried to seize power in Petrograd but failed. Lenin fled to Finland. Other leading Bolsheviks escaped or were imprisoned. Later that month, the provisional government appointed the socialist Alexander Kerensky as prime minister.

In September, General Lavr Kornilov, the army commander in chief, made a bid to seize power and advanced on Petrograd. Kerensky released the imprisoned Bolsheviks and allowed them to arm the workers. Kornilov’s force broke up before reaching the capital, but the Bolsheviks were then free and the workers were armed. The Bolsheviks won a majority in the Petrograd soviet in September 1917, and Lenin returned from hiding that autumn. With most of Russia weak and hungry and fearful of another winter spent at war, Lenin saw that the time was right for a Bolshevik-led take-over. Lenin planned the October Revolution with Leon Trotsky. On Nov. 7, 1917 (Oct. 25, 1917, by the old calendar), armed workers took control of key positions in Petrograd. A Bolshevik-led army of workers, soldiers, and sailors then captured the Winter Palace, which had become the headquarters of Kerensky’s provisional government. Other cities, including Moscow, soon fell to the Bolsheviks.

On November 8, the All-Russian Congress of Soviets authorized the Bolsheviks to set up a “Council of People’s Commissars” to run the national government. Local soviets in towns and cities throughout Russia gave workers control of factories and confiscated the property of large landowners, the Russian Orthodox Church, and anyone who opposed the revolution.

Barely a month after the October Revolution, counterrevolutionaries (known as “White Russians”) began organizing resistance. The Red (Communist) Russians, aided by the peasantry, fought a bloody civil war with the White Russians for nearly three years. The White Russians were supported by fighters from France, Japan, the United Kingdom, and the United States. Foreign-led resistance to the government continued in eastern Siberia for almost two years, but by 1920, the Communists had won and the revolution was complete. In the same year, the government put down a peasants’ revolt resulting from famine and in 1921 suppressed a naval mutiny.

Communist Russia gradually transformed itself into the Soviet Union by re-conquering Ukraine, which it had lost under the Treaty of Brest-Litovsk, as well as Georgia and eastern Armenia, which it had lost for a time during the period of civil war. Russia also suppressed nationalist movements in Byelorussia (now Belarus) and central Asia. In 1922, the Russian Communist government formed the Union of Soviet Socialist Republics (U.S.S.R.), or Soviet Union. In April 1922, Joseph Stalin became general secretary of the Communist Party. From this position, he gained control of the Soviet Union on the death of Lenin in 1924 and remained in power until his own death in March 1953.

At first, many foreign nations refused to recognize the new Soviet government. The United Kingdom recognized the Soviet Union in 1924, followed by the United States in 1933. Yugoslavia did not officially acknowledge the Soviet Union until 1940. The Communist system finally ended in Russia in 1991, two years after it had collapsed in the East European countries. The Soviet Union itself also broke up.