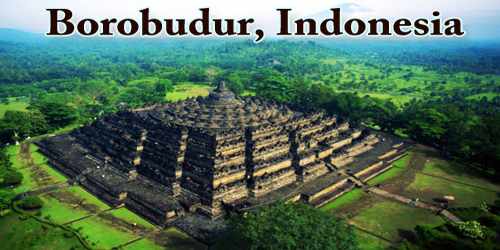 Borobudur also spelled Barabuḍur or Baraboedoer (Indonesian: Candi Borobudur, Javanese: ꦕꦤ꧀ꦣꦶꦧꦫꦧꦸꦣꦸꦂ, romanized: Candhi Barabudhur) is one of the most important Buddhist sites in the world and certainly one of Indonesia’s most famous landmarks. Set in lush, tropical surroundings, with mountains and volcanoes rising in the distance, the site is visually stunning and soothingly peaceful.

It is a 9th-century Mahayana Buddhist temple in Magelang Regency, not far from the town of Muntilan, in Central Java, Indonesia. It is the world’s largest Buddhist temple. The temple consists of nine stacked platforms, six square and three circular, topped by a central dome. It is decorated with 2,672 relief panels and 504 Buddha statues. The central dome is surrounded by 72 Buddha statues, each seated inside a perforated stupa. 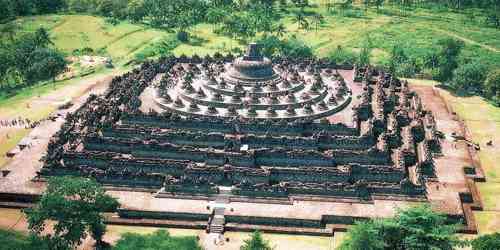 The Borobudur monument combines the symbolic forms of the stupa (a Buddhist commemorative mound usually containing holy relics), the temple mountain (based on Mount Meru of Hindu mythology), and the mandala (a mystic Buddhist symbol of the universe, combining the square as earth and the circle as heaven). The style of Borobudur was influenced by Indian Gupta and post-Gupta art. The monument was designated a UNESCO World Heritage Site in 1991.

Built-in the 9th century during the reign of the Sailendra Dynasty, the temple design follows Javanese Buddhist architecture, which blends the Indonesian indigenous cult of ancestor worship and the Buddhist concept of attaining Nirvana. The temple demonstrates the influences of Gupta art that reflects India’s influence on the region, yet there are enough indigenous scenes and elements incorporated to make Borobudur uniquely Indonesian. The monument is a shrine to the Lord Buddha and a place for Buddhist pilgrimage. The pilgrim journey begins at the base of the monument and follows a path around the monument, ascending to the top through three levels symbolic of Buddhist cosmology: Kāmadhātu (the world of desire), Rūpadhātu (the world of forms) and Arūpadhātu (the world of formlessness). The monument guides pilgrims through an extensive system of stairways and corridors with 1,460 narrative relief panels on the walls and the balustrades. Borobudur has one of the largest and most complete ensembles of Buddhist reliefs in the world.

Borobudur covers an enormous area, measuring 123 x 123 meters. The monument is a marvel of design, decorated with 2,672 relief panels and 504 Buddha statues. The architecture and stonework of this temple has no equal. And it was built without using any kind of cement or mortar! The structure is like a set of massive interlocking Lego blocks held together without any glue.

The story of the Borobudur Temple begins with the Shailendra Dynasty (sometimes spelled Syailendra). This ruling family concentrated their power in central Java in the 8th century CE, and grew to control all of Java and parts of Sumatra. Some scholars think that the Shailendra came to Indonesia from India, while others think they were native to the island. Regardless, they clearly had some cultural connections to India and were major proponents of Mahayana Buddhism, which they actively spread across Indonesia. 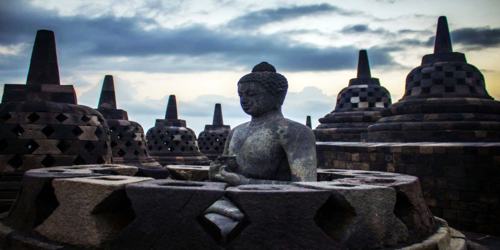 Their biggest achievement was the Borobudur Temple, which was built over roughly 1,200 years from the 8th through 9th centuries. What they accomplished was an engineering marvel for the time; the 95-foot tall step pyramid is made of locally sourced stone set without mortar.

For centuries, Borobudur was a major pilgrimage site, attracting the faithful from as far away as India and China. It seems to have been very popular, but then was inexplicably abandoned in the 15th century. We don’t know why Borobudur was left to be reclaimed by the jungle, but it remained lost for roughly 400 years before the colonial governor of British Java decided to have it excavated.

Evidence suggests that Borobudur was constructed in the 9th century and subsequently abandoned following the 14th-century decline of Hindu kingdoms in Java and the Javanese conversion to Islam. Worldwide knowledge of its existence was sparked in 1814 by Sir Thomas Stamford Raffles, then the British ruler of Java, who was advised of its location by native Indonesians. Borobudur has since been preserved through several restorations. It was rediscovered in 1815, buried under volcanic ash.

In the 1970’s the Indonesian Government and UNESCO worked together to restore Borobudur to its former majesty The restoration took eight years to complete and today Borobudur is one of Indonesia and the world’s most valuable treasures.

Built with about 2,000,000 cubic feet (56,600 cubic meters) of gray volcanic stone, Borobudur encloses a small hill and is shaped like a stepped pyramid with three major levels a square base, a middle level of five square terraces, and an upper level of three circular terraces totaling, in effect, nine lesser sections (the number nine is mystic in Buddhism). The center, 115 feet (35 meters) above the base, consists of a large individual stupa. Each of the monument’s three main levels represents a stage on the way to the bodhisattva ideal of enlightenment; symbolizing this spiritual journey, a pilgrim begins at the eastern stairway and walks clockwise around each of the monument’s nine levels before reaching the top, a distance of more than 3 miles (5 km).

At the lowest level, which is partially hidden, are hundreds of reliefs of earthly desires, illustrating kama-dhatu (“the realm of feeling”), and the lowest sphere of the Mahayana Buddhist universe. On the next level, a series of reliefs depict rupa-dhatu (the middle sphere and “the realm of form”) through events in the life of the Gautama Buddha and scenes from the Jatakas (stories of his previous lives). The upper level illustrates arupa-dhatu, “the realm of formlessness,” or detachment from the physical world; there is little decoration, but lining the terraces are 72 bell-shaped stupas, many still containing a statue of the Buddha, partly visible through the perforated stonework. During the Waicak ceremony, which occurs once a year during a full moon, thousands of saffron-robed Buddhist monks walk in solemn procession to Borobudur to commemorate the Buddha’s birth, death, and enlightenment.

Borobudur is the largest Buddhist temple in the world, and ranks with Bagan in Myanmar and Angkor Wat in Cambodia as one of the great archeological sites of Southeast Asia. Borobudur remains popular for pilgrimage, with Buddhists in Indonesia celebrating Vesak Day at the monument.

The monument is the single most visited tourist attraction in Indonesia. International tourism awards were given to Borobudur archaeological park, such as PATA Grand Pacific Award 2004, PATA Gold Award Winner 2011, and PATA Gold Award Winner 2012. In June 2012, Borobudur was recorded in the Guinness Book of World Records as the world’s largest Buddhist archaeological site.