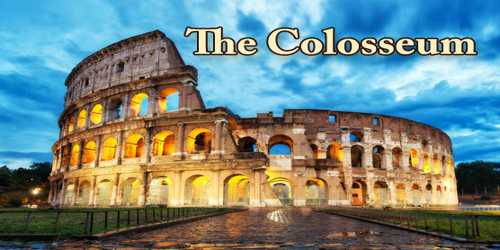 The Colosseum or Coliseum (/ˌkɒləˈsiːəm/ KOL-ə-SEE-əm), also called Flavian Amphitheatre (Latin: Amphitheatrum Flavium; Italian: Anfiteatro Flavio (aɱfiteˈaːtro ˈflaːvjo) or Colosseo (kolosˈsɛːo)), giant amphitheatre built in Rome under the Flavian emperors. Built of travertine limestone, tuff (volcanic rock), and brick-faced concrete, it was the largest amphitheatre ever built at the time and held 50,000 to 80,000 spectators. The Colosseum is situated just east of the Roman Forum. Construction began under the emperor Vespasian in AD 72 and was completed in AD 80 under his successor and heir, Titus. Further modifications were made during the reign of Domitian (81-96). These three emperors are known as the Flavian dynasty, and the amphitheatre was named in Latin for its association with their family name (Flavius).

It is located just east of the Palatine Hill, on the grounds of what was Nero’s Golden House. The artificial lake that was the centrepiece of that palace complex was drained, and the Colosseum was sited there, a decision that was as much symbolic as it was practical. Vespasian, whose path to the throne had relatively humble beginnings, chose to replace the tyrannical emperor’s private lake with a public amphitheatre that could host tens of thousands of Romans. 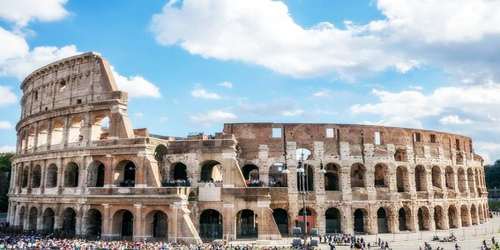 The Colosseum could hold an estimated 50,000 to 80,000 spectators at various points of its history over the centuries, having an average audience of some 65,000; it was used for gladiatorial contests and public spectacles such as mock sea battles (for only a short time as the hypogeum was soon filled in with mechanisms to support the other activities), animal hunts, executions, re-enactments of famous battles, and dramas based on Classical mythology. The building ceased to be used for entertainment in the early medieval era. It was later reused for such purposes as housing, workshops, quarters for a religious order, a fortress, a quarry, and a Christian shrine.

The structure was officially dedicated in 80 CE by Titus in a ceremony that included 100 days of games. Later, in 82 CE, Domitian completed the work by adding the uppermost story. Unlike earlier amphitheatres, which were nearly all dug into convenient hillsides for extra support, the Colosseum is a freestanding structure of stone and concrete, using a complex system of barrel vaults and groin vaults and measuring 620 by 513 feet (189 by 156 metres) overall. Three of the arena’s stories are encircled by arcades framed on the exterior by engaged columns in the Doric, Ionic, and Corinthian orders; the structure’s rising arrangement of columns became the basis of the Renaissance codification known as the assemblage of orders. The main structural framework and facade are travertine, the secondary walls are volcanic tufa, and the inner bowl and the arcade vaults are concrete.

The Colosseum’s original Latin name was Amphitheatrum Flavium, often anglicized as Flavian Amphitheatre. The building was constructed by emperors of the Flavian dynasty, following the reign of Nero. This name is still used in modern English, but generally the structure is better known as the Colosseum. In antiquity, Romans may have referred to the Colosseum by the unofficial name Amphitheatrum Caesareum (with Caesareum an adjective pertaining to the title Caesar), but this name may have been strictly poetic as it was not exclusive to the Colosseum; Vespasian and Titus, builders of the Colosseum, also constructed an amphitheater of the same name in Puteoli (modern Pozzuoli).

In ancient Rome, pleasing the public was an essential part of any politician’s life, even the emperor himself. Emperor Titus Flavius Vespasian’s play to gain the favor of the masses gave history its greatest amphitheatre, the Colosseum. Because Vespasian came from a line of emperors known as the Flavian dynasty (his family name was Flavius), the original name of the Colosseum was the Flavian Amphitheatre.

Vespasian chose the location of the Colosseum, the center of Rome just east of the Forum, because it was close to the religious and commercial areas of the city. This was also the site where Emperor Nero had built his gardens. Symbolically, Vespasian was giving back to the people by building an amphitheatre for their entertainment, while Nero had only built the gardens for himself. The only monument left from Nero’s rule was a large bronze statue of the emperor. This was left on the grounds, but the inscription that identified it as Nero was removed and it was rededicated as a sun god. It is believed that the name Colosseum was derived from this statue, also known as the ‘Colossus of Nero.’

The name Colosseum is believed to be derived from a colossal statue of Nero that once stood nearby. This statue was later remodeled by Nero’s successors into the likeness of Helios (Sol) or Apollo, the sun god, by adding the appropriate solar crown. It was then commonly referred to as the “Colossus solis”. Nero’s head was also replaced several times with the heads of succeeding emperors. Despite its pagan links, the statue remained standing well into the medieval era and was credited with magical powers. It came to be seen as an iconic symbol of the permanence of Rome.

Originally, the gladiator games were held near the tomb of the man being honored or on his property. As the events became more popular and attracted large crowds, they were held in town squares or at the Roman Forum. The first instance of a permanent arena constructed for the purpose of munera (gladiator games) occurred in the first century B.C. Construction on the Colosseum began in 74 A.D. The work included both the amphitheatre and the surrounding area. The structure was not completed until 80 A.D. By that time, Vespasian had passed away (79 A.D.) and his successor Titus was in power.

The Colosseum saw some four centuries of active use, until the struggles of the Western Roman Empire and the gradual change in public tastes put an end to gladiatorial combats and other large public entertainments by the 6th century A.D. Even by that time, the arena had suffered damaged due to natural phenomena such as lightning and earthquakes. In the centuries to come, the Colosseum was abandoned completely, and used as a quarry for numerous building projects, including the cathedrals of St. Peter and St. John Lateran, the Palazzo Venezia and defense fortifications along the Tiber River. Beginning in the 18th century, however, various popes sought to conserve the arena as a sacred Christian site, though it is in fact uncertain whether early Christian martyrs met their fate in the Colosseum, as has been speculated. 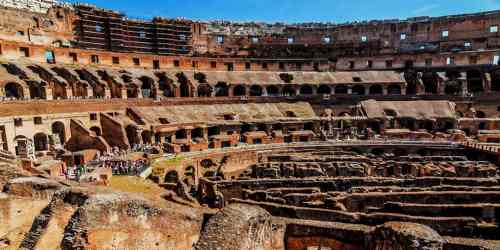 (Interior of The Coliseum)

The Colosseum, like other Roman amphitheatres, was shaped like an elliptical oval. This shape functioned as a way to allow the editor of the games to see everything and be seen by everyone in attendance, giving him a place of importance and public recognition.

The word ‘arena’ comes from a Latin word for sand. The arena was covered with sand for two purposes: to soak up the blood from the fights and to give the gladiators good footing. The area of the Colosseum was a massive 620 feet by 510 feet with walls that rose 157 feet. The floor level consisted of 80 archways with numbered entrances. Key innovations included a pulvinar, or royal box for the emperor; numbered seats, similar to the seating in modern stadiums; numbered clay pieces that served as tickets for guests; and a velarium, a huge sunshade that was deployed on very hot days.

The Colosseum was damaged by lightning and earthquakes in medieval times and, even more severely, by vandalism. All the marble seats and decorative materials disappeared, as the site was treated as little more than a quarry for more than 1,000 years. Preservation of the Colosseum began in earnest in the 19th century, with notable efforts led by Pius VIII, and a restoration project was undertaken in the 1990s. It has long been one of Rome’s major tourist attractions, receiving close to seven million visitors annually. Changing exhibitions relating to the culture of ancient Rome are regularly mounted.

Although substantially ruined because of earthquakes and stone-robbers, the Colosseum is still an iconic symbol of Imperial Rome and is listed as one of the New7Wonders of the World. It is one of Rome’s most popular tourist attractions and also has links to the Roman Catholic Church, as each Good Friday the Pope leads a torchlit “Way of the Cross” procession that starts in the area around the Colosseum.

The Colosseum had a hypogeum (Latin for ‘underground’), a structure of tunnels and cages that housed gladiators and animals. Impressively, workers used a system of pulleys to raise cages and release animals into the arena suddenly. The tunnels were built with separate access for the emperor. The Colosseum was damaged and repaired several times after construction was finished.

In 2018, it was the most popular tourist attraction in the world, with 7.4 million visitors. The Colosseum is also depicted on the Italian version of the five-cent euro coin. 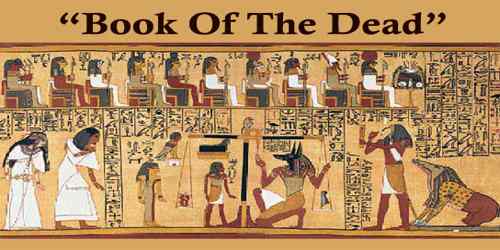 Book Of The Dead