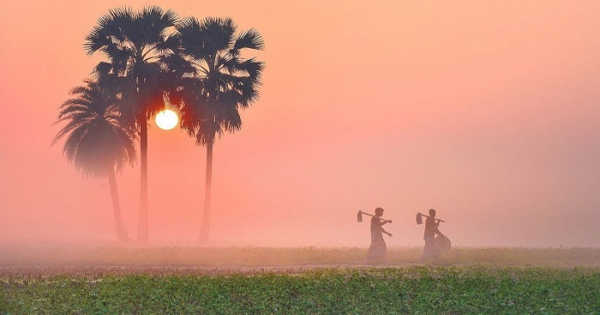 Description: During winter a cold wind blows from the north. It is a season of mists. It begins to fall at night and disappear when the sun rises in the morning. The day is shorter when the night in winter. The weather remains very cold during the winter. It is the season of mist and fog. The sun rises late and sets early. Even when the sun rises, it is a matter of good luck to see the face of the sun as it remains covered with dense fog. Mists begin to fall at night and disappear as the sun rises in the morning. The nights are longer than the days. The cold wind blows from the north. Most of the trees shed their leaves. Then they look like skeletons. Everything looks grey and hazy due to the dense fog. Everybody wears heavy clothes to ward off the cold.

The sun rises late. Sometimes it is not distinctly visible through the fog. Dewdrops on the grass and leaves of trees during the night glitter like pearls as the sun rays fall on them. Trees become bare of leaves. Nature looks dead and gloomy. The students have their annual examination in winter.

Merits: It is the season for food lovers. Juice is collected from date trees. Molasses and sugar are made from it. In every household different types of cakes and special dishes are prepared in winter. Various kinds of fresh vegetables are available during the winter. Everything is fresh and tasty in this season. It is also a season for traveling. People go to different tourist spots to have vacations and picnics. In this season, the village roads remain dry. So, people go to visit their relatives in winter. An air of festivity prevails in the whole season.

Fruits and vegetables: In winter we get juice from the date. Many kinds of cakes are made in this season. Vegetables and fruits like cabbages, caulie-flowers, peas, and oranges grow in plenty.

A season of festivities: In winter farmers can work hard. Social festivals are held in this season. It is also the time for school and college sports. Winter has a very pleasing feature for young/aged boys and girls as it provides them with a very important moment of marriage. Many marriages are solemnized in this season. Hence it is called or popularly known as the season of marriage. Parents and legal guardians of young boys and girls keep waiting for this season to marry them off.

Marriage bells in this season start ringing and the air becomes filled with the tantalizing aroma of Kachchi biryani, polao, and plain bhat and beef especially in rural areas. This is the season to eat and of course a time to make the age-old oath that binds a man and woman together.

Deceits: The poor do not like this season because they cannot buy warm clothes. They lit up the fire with straw and bask in the fire. In the morning people are also found sitting in the sun for warmth. Sometimes, cold waves hit. Then the children and the old people suffer very much. Many people even die from the terrible cold. So they shiver in cold.

Conclusion: Most of the birds migrate to warm countries. Everybody hurries back home in the evening and goes to bed early. This season is enjoyable in Bangladesh. It heralds the advent of spring. Winter is pleasant to all. This is so because the people of our country live in a warm climate. It is brief and comes after a long wait, we welcome it and feel sad when it leaves us.