Home Business Accounting What is Meant by Debenture? 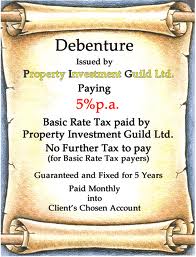 A debenture is a term which refers to long term debts or loans made by a borrower / borrowers which are unsecure and which are not backed by collaterals as common practice in other types of loans.
Debentures are not issued by individual persons, but rather by financially strong companies or groups such as corporations and governments. The good thing about debentures in the case of the borrower is that assets are not turned as collaterals.

A debenture is one of the most typical forms of long term loans that a company can take.

It is normally a loan that should be repaid on a specific date, but some debentures are irredeemable securities (sometimes referred to as perpetual debentures).

The majority of debentures come with a fixed interest rate. This interest must be paid before dividends are paid to shareholders. In the US, most debentures are unsecured, but elsewhere debentures are typically secured through the borrower’s assets.

Debenture holders (investors) are not allowed to vote in the company’s general shareholders meetings, but they may have separate meetings or votes, for instance regarding changes to the rights associated with the debentures.

The interest that is paid to debenture holders is calculated as a charge against profit in the company’s financial statements.

Heads of Income and Expenditure of a Bank