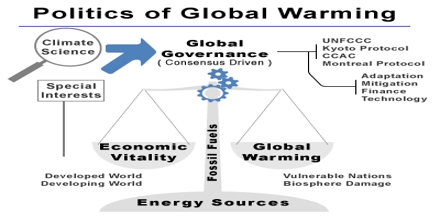 The focus areas with regard to global warming governmental policies are Adaptation, Minimization, Finance, Technology and Losses which are well quantified and studied though the urgency of this global warming challenge and also the implication to nearly every facet of some sort of nation-state’s economic pursuits places significant burdens on the established largely-voluntary global institutions who have developed during the last century.