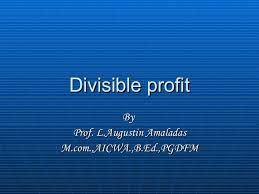 The profits available for the distribution among the shareholders of a company as dividend are called divisible profits. The profits are calculated by comparing the income and expense of one year. The necessary adjustments are made before calculating the profit of a business concern. The accounting principles are followed. The directors have the right to create provisions, reserves and funds out of business profits under the articles of association and the Companies Ordinance 1984.

Dividend must be paid out of the revenue profits. The correct calculation is essential for all who depends upon business. The overstatements can disturb one section of investors while understatement can upset another group. It is clear that divisible profits are profits available for shareholders in the shape of dividend.

PRINCIPLES OF DIVISIBLE PROFIT :-
Following are the important principles of divisible profits :

1. According The Company Rules :-
The articles of association are the rules of the company. The directors are entitled to distribute the profits under rules. They also follow the company law. The dividend can be paid out of revenue profit.

2. Follow The Court Cases :-
While calculating the divisible profits, the court cases must be kept in mind. The auditors must know the decisions of the courts announced time to time.

3. Profit Not Out Of Capital :-
The capital can not be used to pay dividend. The revenue profits can be used for the payment of dividend.

4. Approval Of Shareholders :-
In the annual general meeting shareholders may approve the rate of profit recommended by the directors. So divisible profits can be used to pay as dividend after approval.

5. Right Of Proposal :-
The directors can purpose the rate of dividend out of divisible profits. After completing the legal formalities the directors can decide the dividend.

6. Undistributed Profit :-
It is the right of the directors to use such profit for the payment of dividend at the end of a year. It is a revenue of the provision year.

7. Depreciation :-
Before declaring revenue profits the depreciation on fixed assets must be charged. In manufacturing company it is compulsory to charge depreciation before the declaration of profits.

8. Secrete Reserves :-
If according the articles association it is allowed to create and use the such reserves then these can be used for the payment of dividends.

9. Capital Profits :-
Under certain conditions the capital profit can be used to pay dividend but articles association should allow the distribution of capital profit as dividend.

10. Capital Loss :-
Inspite of capital loss the dividend can be paid out of revenue profits. The capital profit must be used to eliminate capital loss first and then surplus can be used to pay dividends.

11. Loss Of Provision Year :-
If a company suffers a loss in one year but earns profit next year. Such loss can be adjusted by the company from benefit of the current year.

12. Revaluation Of Assets :-
After the revaluation of asset, if it becomes surplus then it can be used after realization. Profit may be paid after selling the assets.

13. Revenue Profits :-
According the principle of divisible profit dividend must be paid out of revenue profit. But it is essential that calculation should be correct.

14. Asset Goodwill Written Down & Up :-
If a company has written down good will out of profits, it may also write up this asset, with the appreciation. But the value written up should not excess than the true value.

Assignment on Choosing Business Tax Accountants from the Start