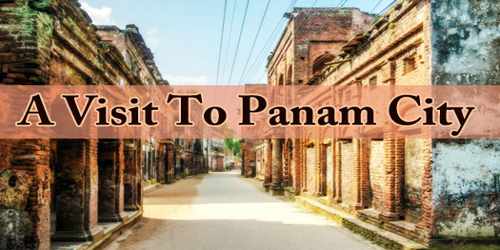 A Visit To Panam City

Panam City (also known as Panam Nagar (পানাম নগর)), is situated at Sonargaon, Narayanganj in Bangladesh. It is an ancient historical city in Bangladesh. It is one of 100 ruined historical cities of the world. Among the three cities of boro nogor (Big City), khas Nogor, Panam City, it was the most attractive city. There are many historical buildings which were built centuries ago and those are related with the history of Baro-Bhuyan. It covered a 20 km area of Sonargaon. Panam City is one of the most visited tourist spots in Bangladesh. It is about 2.5 kilometres to the north of the Dhaka-Chittagong highway at Mograpara point. It is said to have been the site of the Hindu capital city of Sonargaon emerging in the seventh decade of the thirteenth century. The Panam area formed part of the Muslim metropolis developed on the south of the old city, and perhaps constituted the place of residence of the early Muslim governors’. After the Mughal conquest of Sonargaon (1611), the Panam area was connected with the ruling metropolis by the construction of highways and bridges. Panam still possesses three brick bridges belonging to the Mughal period: Panam Bridge, Dalalpur Bridge, and Panamnagar Bridge.

There are 52 establishments in the colonial period at the two sides of Panama City. There are 31 in the north and 21 in the south. In the architecture of the structures, a mix of Mughal artistry is seen with European art. Panam City has been built with perfect design. Almost every house has a well-appointed landscape with wells. For the city’s water supply, the number of canals and ponds are noticed. Apart from residential buildings, there are places of worship, bathroom, pantry, darbar hall, etc. There are more structures around the city of Panam, such as small Sardar’s house, Isha Khan’s arcade, Nilkuthi, merchant settlement, Thakur house, Panam Nagar bridge etc. There is also a fascinating folk art museum here.

In all probability, the present Panamnagar grew as a by-product of the commercial activities of the English East India company and of the Permanent Settlement. The East India Company established its factory in Panam for the purchase of muslin and other cotton fabrics. The Company, for the purchase of muslin, used to distribute annually to the weavers from their factory in Panam as much as a lakh of rupees as dadni (dadni system advance), and it is estimated that there were then 1400 families of Hindu and Muslim weavers in and around Panam. The Sonargaon historic city, located near the present-day capital of Dhaka, includes several Mughal monuments among them the Sonakanda River Fort, the Panch Pir Mazar Shrine, and Ibrahim’s and Abdul Hamid’s Mosque. British colonial architecture preserved in Sonargaon includes the Ananda Mohan Piddar House, and other street-front houses. For travelers making their way along the 2,500-kilometer Grand Trunk Road from Peshawar in the Hindu Kush, Sonargaon marked the end of the line. Threats to the site include flooding, vandalism, unauthorized occupation, illegal development, etc. Located in the north, anyone who has a private car or microbus can go straight to the city. If anyone wants to go to the bus, they will have to come to the Dhaka-Chittagong highway. From there they have to go to Panama City with rickshaw/auto-rickshaw. Panam City is located within about 2 km from Moghardapara Busstadt. So anyone who lives, minibus babitexi, motorcycle can go there on any type of vehicle.