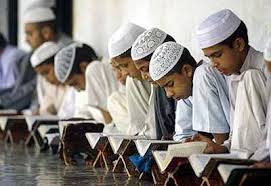 According to Encyclopaedia of Islam the Arabic word “madrasah” generally has two meanings. One is in its more common usage, it simply means school. in its secondary meaning, a madrasa is an educational institution offering instruction in Islamic subjects including, but not limited to, the Quran, the sayings (hadith) of the Prophet Muhammad, jurisprudence and law. Madrasah generally refers to Muslim private schools with core emphasis on Islamic studies and Arabic literacy.