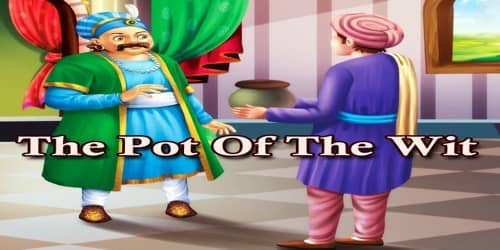 The Pot Of The Wit

Once Emperor Akbar became very angry at his favorite minister Birbal. He asked Birbal to leave the kingdom and go away. Accepting the command of the Emperor, Birbal left the kingdom and started working in a farmer’s farm in an unknown village far away under a different identity.

As months passed, Akbar started to Miss Birbal. He was struggling to solve many issues in the empire without Birbal’s advice. He regretted a decision, asking Birbal to leave the empire in anger. So Akbar sent his soldiers to find Birbal, but they failed to find him. No one knew where Birbal was. Akbar finally found a trick. He sent a message to the head of every village to send a pot full of the wit to the Emperor. If the pot full of wit cannot be sent, fill the pot with diamonds and jewels.

This message also reached Birbal, who lived in one of the villages. The people of the village got together. All started talking about what to do now? The wit is not a thing, which can be filled in the pot. How will we arrange for diamonds and jewels to fill the pot and send to the Emperor? Birbal who was sitting among the villagers said, “Give me the pot, I will fill the wit in one month’s end”. Everyone trusted Birbal and agreed to give him a chance. They still didn’t know his identity.

Birbal took the pot with him and went back to the farm. He had planted watermelons on his farm. He selected a small watermelon and without cutting it from the plant, he put that in the pot. He started looking after it by providing water and fertilizer regularly. Within a few days, the watermelon grew into a pot so much that it was impossible to get it out of the pot.

Soon, the watermelon reached to the same size as the pot from inside. Birbal then cut the watermelon from the vine and separated it with the pot. Later, he sent a pot to Emperor Akbar with a message that “Please remove the wit without cutting it from the pot and without breaking the pot”.

Akbar watched the watermelon in the pot and realized that this can only be Birbal’s Work. Akbar himself came to the village, took Birbal back with him.

Moral of the story: ‘Don’t hasten the decision. Think hard to find a solution for the strangest situations.’