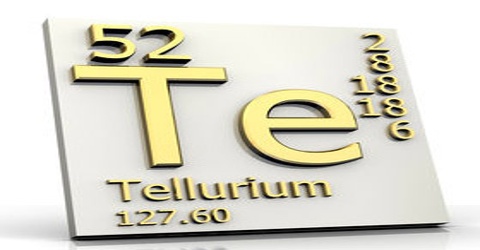 Tellurium is a metalloid element that occurs as either a brittle, shiny, silvery-white crystal or a gray or brown powder. It is far more common in the universe as a whole than on Earth. Its extreme rarity in the Earth’s crust, comparable to that of platinum, is due partly to its high atomic number, but also to its formation of a volatile hydride which caused it to be lost to space as a gas during the hot nebular formation of the planet. Its atomic number 52; atomic weight 127.60; melting point 449.5°C; boiling point 989.8°C; specific gravity 6.24; valence 2, 4, 6. Tellurium is unaffected by water or hydrochloric acid, but dissolves in nitric acid. It is produced commercially as a by-product of the electrolytic refining of Copper and used to alloy stainless steel and Lead, in ceramics, and, in the form of bismuth telluride, in thermoelectric devices.

Tellurium is very toxic and teratogenic can cause harm to developing embryos. Exposure to as little as 0.01 mg/m2 or less in air leads to “tellurium breath”, which has a garlic-like odor.

It forms many compounds corresponding to those of sulfur and selenium, the elements above it in the periodic table. For example, it forms tellurides with other metals and tellurite (TeO32) and tellurate (TeO42-) compounds.

Production and Properties of Tellurium

Tellurium was discovered by Franz Joseph Müller von Reichenstein, a Romanian mining official, in 1782.  Tellurium is sometimes found free in nature. More commonly, it is found combined with metals, such as in the minerals calaverite (gold telluride, AuTe2) and sylvanite (silver-gold telluride). Commercially, tellurium is obtained as a byproduct of electrolytic copper refining. Anode sludge collected during electrolytic copper refining, are the principal source of tellurium, which is only produced as a by-product of copper and base metals. Other sources can include flue dusts and gases produced during lead, bismuth, gold, nickel and platinum smelting.

The principal source of tellurium is from anode sludges from the electrolytic refining of blister copper, which contain both selenides and tellurides, often have a tellurium content of more than 5% and can be roasted with sodium carbonate at 932°F (500°C) to convert the telluride to sodium tellurite. Using water, tellurites are then leached from the remaining material and converted to tellurium dioxide (TeO2).

Commercial-grade tellurium is usually marketed as 200-mesh powder but is also available as slabs, ingots, sticks, or lumps. It is produced mainly in the United States, Peru, Japan and Canada. The British Geological Survey gives the following production numbers for 2009: United States 50 t, Peru 7 t, Japan 40 t and Canada 16 t. The principal end-use for tellurium, accounting for as much as half of all tellurium produced annually, is in steel and iron alloys where it increases machinability. Tellurium, which does not reduce electrical conductivity, is also alloyed with copper for the same purpose and with lead to improve resistance to fatigue. In chemical applications, tellurium is used as a vulcanizing agent and accelerator in rubber production, as well as a catalyst in synthetic fiber production and oil refining.

Tellurium is also used in the electronics industry, for example with cadmium and mercury to form photosensitive semiconductors. Cadmium telluride (CdTe) is used as a thin film in solar panels to convert sunlight into electricity. CdTe panels have an efficiency rating of between 11 and 13 percent compared to amorphous silicon solar panels which have an efficiency of between 7 to 9 percent. It is used in vulcanizing rubber and in catalysts for petroleum cracking and in blasting caps for explosives.