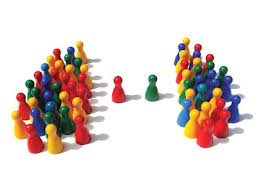 Supplier power is a mirror image of the buyer power. As a result, the analysis of supplier power typically focuses first on the relative size and concentration of suppliers relative to industry participants and second on the degree of differentiation in the inputs supplied. The ability to charge customers different prices in line with differences in the value created for each of those buyers usually indicates that the market is characterized by high supplier power and at the same time by low buyer power (Porter, 1998). Bargaining power of suppliers exists in the following situations:

Where the switching costs are high (switching from one Internet provider to another);

Fragmentation of customers (not in clusters) with a limited bargaining power (Gas/Petrol stations in remote places).

The nature of competition in an industry is strongly affected by the suggested five forces. The stronger the power of buyers and suppliers, and the stronger the threats of entry and substitution, the more intense competition is likely to be within the industry. However, these five factors are not the only ones that determine how firms in an industry will compete – the structure of the industry itself may play an important role. Indeed, the whole five-forces framework is based on an economic theory know as the “Structure-Conduct-Performance” (SCP) model: the structure of an industry determines organizations’ competitive behaviour (conduct), which in turn determines their profitability (performance). In concentrated industries, according to this model, organizations would be expected to compete less fiercely, and make higher profits, than in fragmented ones. However, as Haberberg and Rieple (2001) state, the histories and cultures of the firms in the industry also play a very important role in shaping competitive behaviour, and the predictions of the SCP model need to be modified accordingly.

The power of suppliers:

The power of suppliers tends to be a reversal of the power of buyers. Where the switching costs are high e.g. Switching from one software supplier to another.  Power is high where the brand is powerful e.g. Cadillac, Pizza Hut, Microsoft. There is a possibility of the supplier integrating forward e.g. Brewers buying bars.  Customers are fragmented (not in clusters) so that they have little bargaining power e.g. Gas/Petrol stations in remote places.

Huawei began its operations in Bangladesh in 1998. Over the years the company has grown to become one of the leading communication suppliers, providing comprehensive services to all the Bangladeshi telecom operators. the company has become the second biggest supplier to Airtel..

Strategic Partnership with IBM and Ericsson for outsourcing of the Company core IT network activities.

Network Equipments: There are limited Network Equipment providers like ZTE,Nokia Siemens, Ericsson, Huawei. Due to the increase in demand and limited suppliers the power of these suppliers are high and may impact the growth plan of the operators if supplies are not smooth.

Tower Providers: Though the new sharing technology has help in utilizing the Towers but still the coverage remains a problem due to few Tower provider bargaining power of Tower providers if High.

Handset Suppliers: Nokia, Samsung, LG, Sony, iPhone and numerous other players. The bargaining power of Handset Suppliers is less as they are also competing amongst themselves.

Overall we can make out that the key supplies powers are high for Mobile Industry.

The Pros and Cons of In-House IT Solutions

Use of Motor Oil