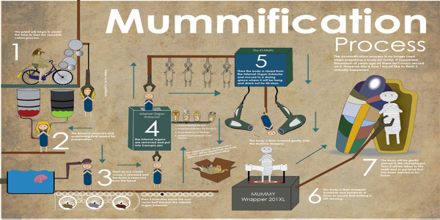 This lecture introduce on Steps in Mummification. After the body was washed and covered with scented oils, the liver and kidneys were removed and placed in jars that would be put in the coffin later. The brains were removed carefully, but the heart was left in the body because they believed it was the mind and would be needed immediately in the next life. Then the body was wrapped in either linen or rough cotton strips and a sticky tar-like mixture was poured over the cloth strips forming a protective outer covering for the body. When the mixture hardened, the mummy was placed in a wooden coffin, which was carved and painted to resemble a person.

Why do Wars Occur?

How did Life in Egypt affect Medicine?