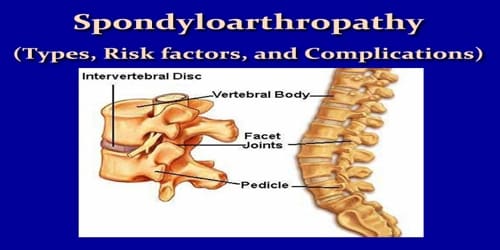 Definition: Spondyloarthropathy or spondyloarthrosis refers to a group of inflammatory rheumatic diseases that includes ankylosing spondylitis and psoriatic arthritis. As such, it is a class or category of diseases rather than a single, specific entity. It differs from spondylopathy, which is a disease of the vertebra itself. However, many conditions involve both spondylopathy and spondyloarthropathy.

The predominant symptom among them is joint pain and inflammation, sometimes affecting the spine. In some cases, these diseases can become systemic, causing inflammation in the eyes, gastrointestinal tract, and skin.

Spondyloarthropathy can be classified as either axial or peripheral. The axial form affects mostly the pelvic joints and spine. The peripheral form affects the limbs. The condition may also cause inflammation in the eyes, gastrointestinal tract, and areas where ligaments and tendons attach to our bones.

Spondyloarthropathy with inflammation is called axial spondyloarthritis. Non-vertebral signs and symptoms of degenerative or other not-directly-infected inflammation, in the manner of spondyloarthropathies, include asymmetric peripheral arthritis (which is distinct from rheumatoid arthritis), arthritis of the toe interphalangeal joints, sausage digits, Achilles tendinitis, plantar fasciitis, costochondritis, iritis, and mucocutaneous lesions. However, lower back pain is the most common clinical presentation of the causes of spondyloarthropathies; this back pain is unique because it decreases with activity.

Spondyloarthritis is serious. But with the right coping strategies and a consistent treatment plan, most people with the condition live full lives. 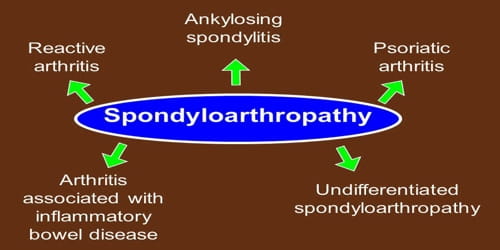 Types of Spondyloarthropathy: The most common form is called “ankylosing spondylitis.” This type mainly impacts the joints of the spine. It may also affect other large joints in the body. But there are other forms as well:

Reiter’s syndrome is a type of reactive arthritis that happens as a reaction to an infection in another part of our body. It can include redness, joint swelling, and pain, often in knees, ankles, and feet.

Risk factors and Complications: It’s not always clear why someone gets spondyloarthritis. People’s risk for the condition may be higher if they:

Living with a form of spondyloarthritis puts people at risk for certain systemic complications. These include:

Osteoporosis, which occurs in up to half of patients with ankylosing spondylitis, especially in those whose spine is fused. Osteoporosis can raise the risk of spinal fracture.